The Australian government answered the calls from US Secretary of State Mike Pompeo to “push back against the Chinese Communist Party” by backing their American counterparts in a letter to the United Nations rejecting “any claims by China that are inconsistent with the 1982 United Nations Convention on the law, in particular, maritime claims that do not adhere to its rules on baselines, maritime zones and classification of features”.

Building on Pompeo’s statements “making clear: Beijing’s claims to offshore resources across most of the South China Sea are completely unlawful, as is its campign of bullying to control them”, Australia’s permanent mission to the UN stated “there is no legal basis for China to draw straight baselines connecting the outermost points of maritime features or ‘island groups’ in the South China Sea”.

These recent measures are likely to intensify tensions with China, as its Australian embassy urged “the Australian side to immediately stop meddling” in Chinese internal affairs “otherwise it will lead to nothing but lifting a rock only to hit its own feet”.

With Prime Minister Scott Morrison suspending Australia’s extradition treaty with Hong Kong over “concerns about the imposition of the national security law” earlier this month, an escalation in actions taken against the trade-dependant nation is almost a certainty.

Australia seems to be playing a dangerous game with its primary trading partner, putting almost $180 billion at risk and threatening the nation’s fragile economic recovery.

With that in mind, the development of this relationship will prove pivotal in dictating the outlook for the Australian Dollar, with escalation potentially hampering the trade-sensitive currency against its major counterparts. 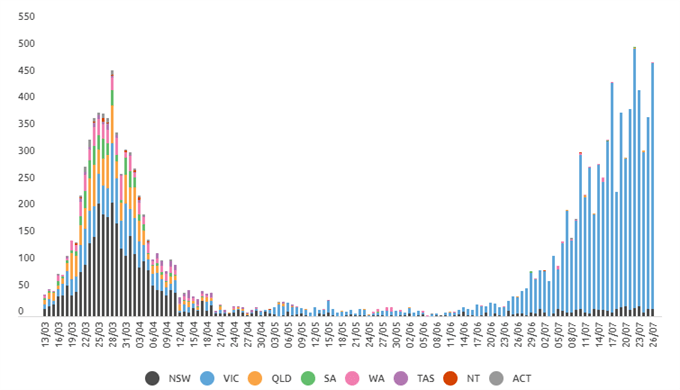 Furthermore, the inability to supress a ‘second wave’ of Covid-19 infections in Victoria, Australia’s second-most populous state, could continue to weigh on the performance of regional risk assets as the state recorded its deadliest day since the pandemic began.

Although Chief Health Officer Brett Sutton soothed stage-four restriction concerns stating “the very places where we are seeing outbreaks, the very places we are seeing transmission, are the places that would remain open if we went to a stage four” he continues to be concerned that “the numbers have remained stubbornly high”.

With that in mind, an extension of the six-week lockdown period looks more than likely, potentially souring investor sentiment and weighing on AUD as it stalls at yearly highs. 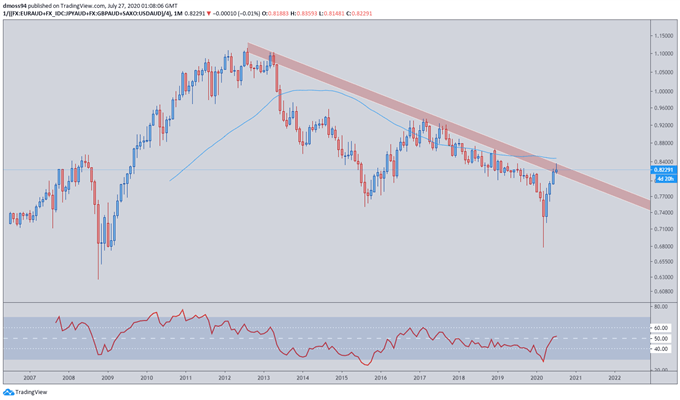 From a technical perspective, the Australian Dollar seems to be on the verge of a key reversal against its major counterparts as price fails to break above 8-year downtrend resistance and the 50-month moving average (0.8470).

The bearish outlook is reinforced by the development of the RSI as it notably flops just above its neutral midpoint, suggesting a degree of exhaustion in the recent recovery from the yearly low (0.6784).

A Shooting Star monthly candle may invigorate AUD sellers and potentially signal the resumption of the longer-term downtrend established in late 2012. 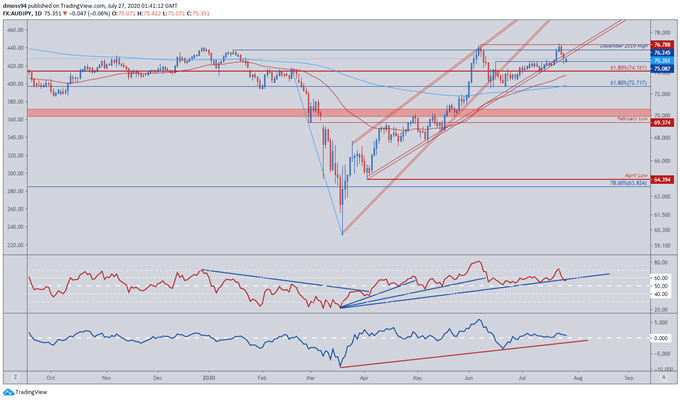 The AUD/JPY exchange rate may continue to pull back from the yearly high set on July 22, as price collapsed through the supportive uptrend extending from the April low (64.39).

Carving out a potential Double Top reversal pattern just shy of the June high (76.79), the path of least resistance seems skewed to the downside as the RSI dives below 60 and snaps its constructive uptrend from the yearly extremes.

A daily close below psychological support at the 75 handle may validate the bearish reversal pattern and fuel a sustained decline back to the 200-day moving average and 61.8% Fibonacci (72.72).