NZD/USD Trapped in a Wedge

As a second-wave of Covid-19 infections sweeps through the United States, many have praised New Zealand for its handling of the pandemic which has already allowed for the country to reopen its economy. However, as the second wave now spreads through Australia, tourism is once again being put on hold, potentially producing pressure on the NZD/USD. Although the NZD/USD has managed to recover from March 2020 lows, the pair is now trading in a wedge formation, with bulls and bears patiently waiting for a break in either direction.

The 4-hour chart below highlights the NZD/USD trading in a symmetrical wedge formation, characterized by both lower highs and higher lows, with price action digesting deeper in the wedge. 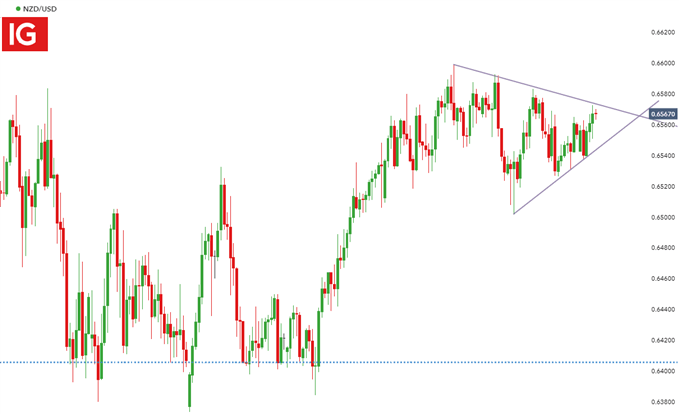 Recommended by Tammy Da Costa
Need help understanding the basics of Forex?
Get My Guide

Although the pair has managed to recover from the March 2020 lows, the two above-mentioned Fibonacci levels have now formed clear areas of support and resistance which, to this point, have kept both bulls and bears at bay. 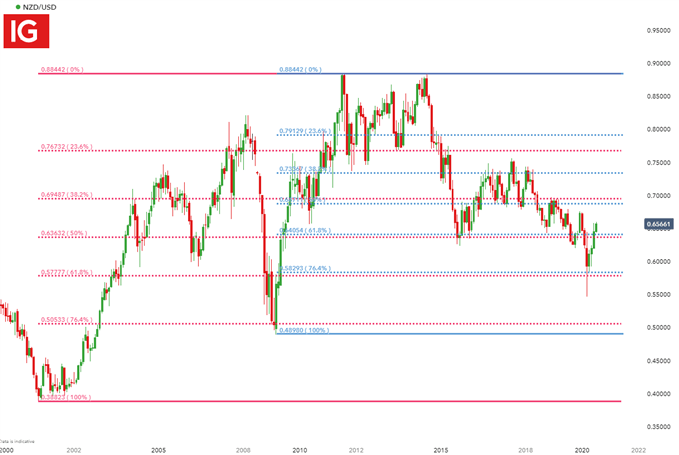 After recovering from March lows, a strong bullish trend was present, which has now slowed, with price action showing a penchant for mean reversion. If prices break above the current wedge, bulls may focus on an extension of the move, given the presence of the bull pennant formation. A breakout above the wedge/bull pennant will next encounter a key spot of resistance around the psychological level of 0.66; while a break below may see the Kiwi falling towards the 0.64 level, which is confluent with the 61.8% retracement level of the secondary major move looked at above.

According to client sentiment, majority of retail traders are showing a bearish bias towards NZD/USD, with 68% of traders holding short positions. We typically take a contrarian view to crowd sentiment, and the fact traders are net-short suggests that prices may continue to increase.