Crude oil is up against the Saudi gap from March that eventually led to the front month contract turning negative. It is not surprising that this is acting as such a big level, but if the recovery in risk assets continues then it appears likely, barring negative geo-political headlines, that oil will trade on through. But even then the lows from 2017 and 2018 along with the 200-day lie ahead. A lot to deal with ahead. A break through, though, would likely send oil flying higher.

Recommended by Paul Robinson
Check out the recently released Q3 Oil forecast.
Get My Guide 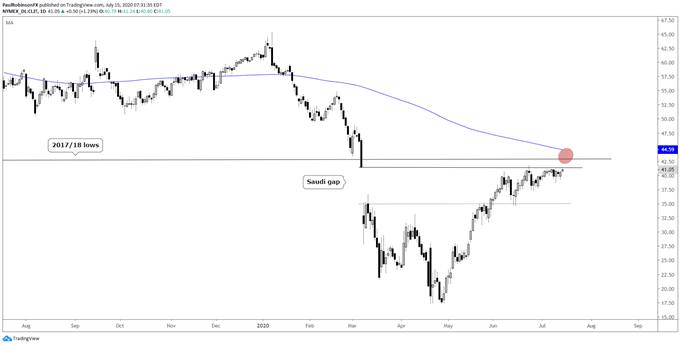 The S&P 500 has been sluggish, but appears headed higher soon. The coronavirus gap from late February appears to to be begging to get filled. The gap is from 3257 up to 3337, with the record high not far beyond there at 3393. It seems the way stocks are flowing this will be the case.

Gold remains positioned bullishly with it working its way higher in near-term, but yet needs to cross well above 1800 to get beyond the triple peaks created in 2011/12 in the wake of the prior bull market high in 2011. Should we see some acceleration soon, then a run at the 1920 high could come soon. A break below 1790 will bring some caution to the near-term picture, while a break below 1756, the July 6 low, will bring in potential for an intermediate-term correction. 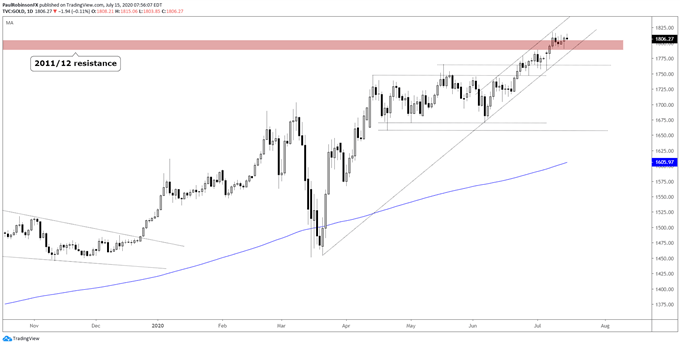