Singapore’s economy has officially entered a technical recession, whereby a nation (or in this case city-state) experiences two consecutive quarters of negative GDP. The Singapore Dollar reacted negatively, depreciating against the US Dollar as the data crossed the wires.

Singapore saw its economy shrink -41.2% quarter-over-quarter in Q2, following a -3.3% reduction in the first quarter. This is as year-on-year GDP clocked in at -12.6% in Q2 versus -0.3% prior. These dismal outcomes were the worst on record, surpassing declines seen around the 2008 global financial crisis – see chart below.

Both these outcomes were worse than expected, perhaps signaling that economists were underestimating the devastating impact lockdown measures have had on Singapore to help contain the coronavirus. Construction, service and manufacturing sectors saw output shrink -95.6%, -37.7% and -23.1% (QoQ) respectively.

The island nation also relies heavily on global trade, which is taking a toll from the pandemic. In response, Singapore’s Minister of Trade and Industry Chan Chun Sing said that the government will do more to help workers adapt. This also follows the worst performance on record for the ruling party after local elections last week.

While policymakers draw the next steps to support the economy, the risk-sensitive Singapore Dollar will likely turn to external factors ahead. Namely, the second quarter US earnings season. There, relatively elevated stock valuations will be tested. A sudden turnaround in market mood risks denting SGD as USD appreciates.

Singapore GDP Shrinks Most on Record 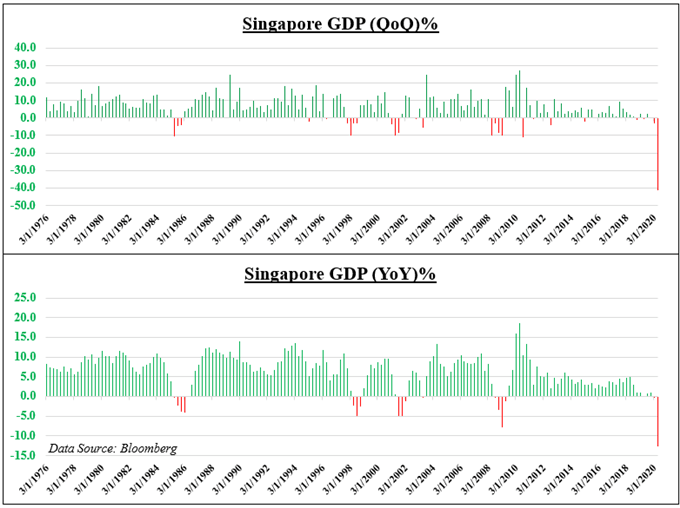 Following the data, USD/SGD bounced off key support at 1.3872 as it eyes resistance at 1.3993. Since the middle of June, the Singapore Dollar has been in a consolidative state, trading within this boundary. Now, prices may also test the 20-day Simple Moving Average (SMA) which could open the door to facing key falling resistance from March – red line on the daily chart below.

Singapore’s benchmark stock index, the Straits Times, may soon pressure key rising support from April – red lines. However, prices also face the 50-day SMA which could hold and send prices bouncing towards the near term falling tend line from June. A further push above resistance at 2707 could open the door to testing June highs. Otherwise, a drop through 2572 could accelerate losses on fading local economic confidence.