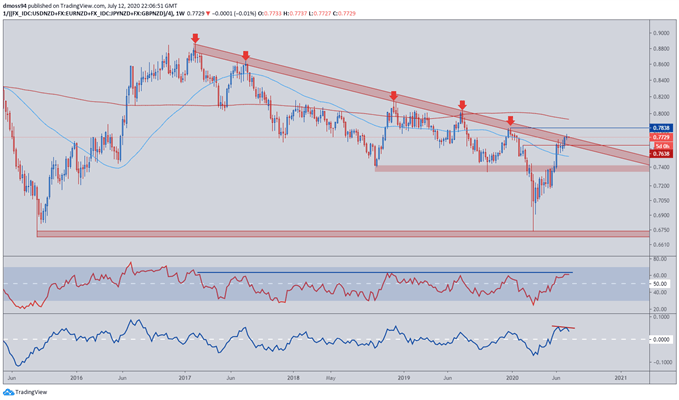 The New Zealand Dollar’s recovery from the March low (0.6740) seems to be running out of steam as weekly price action suggests the risk-sensitive currency may lose ground against its major counterparts.

A 15% surge over the last 4 months has seen price easily slice through resistance at the 50-day moving average (0.7520), pushing to test a familiar inflection point at the 2017 downtrend and carving out a potential Descending Triangle formation.

Further upside looks to be limited as the Momentum indicator fails to follow price to higher highs – known as bearish divergence – and the RSI stalls just shy of bullish territory above 60.

Long-term Descending Triangle resistance may continue to steer price lower, with a break below the February high (0.7638) potentially igniting NZD sellers as they look to resume the primary downtrend extending from the 2017 highs. 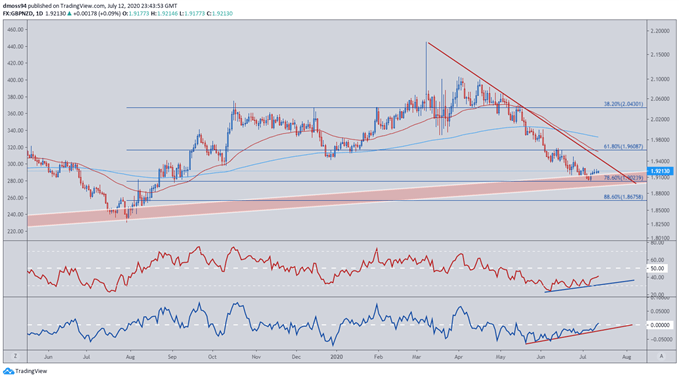 The British Pound looks set to recover lost ground against its New Zealand counterpart, after finding support at the 78.6% Fibonacci (1.9024).

This bullish outlook is reinforced by the development of the RSI and Momentum indicators as they both move to higher highs, diverging with price and suggesting potential exhaustion of the recent decline.

The path of least resistance remains to the upside, with a break of the downtrend that has successfully stifled bulls since March potentially fueling a surge to the 61.8% Fibonacci (1.9608) and 200-day moving average (1.9862). 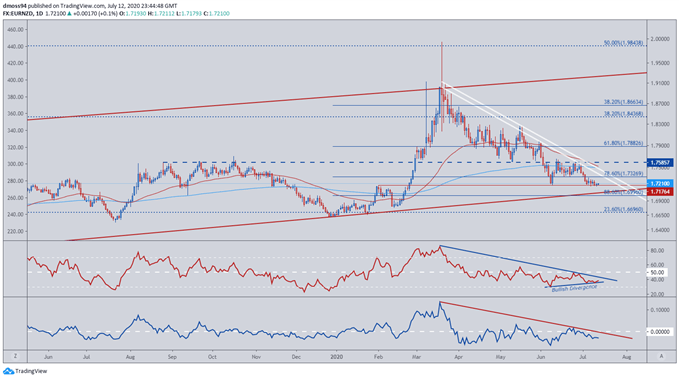 The EUR/NZD exchange rate looks to be carving out a potential Double Bottom reversal pattern at the February swing high (1.7176) as the RSI and Momentum indicators both fail to confirm the recent decline in price.

A recovery to test the 1.73 level and the downtrend extending from the liquidity-driven March highs may be in the offing should both technical indicators continue to strengthen.

Having said that, a potential ‘death cross’ formation on the moving averages could stoke sellers, potentially propelling price back to Ascending Channel support and the 88.6% Fibonacci (1.6696).

However, with price continuing to track in an Ascending Channel extending from the 2017 lows, a break to the upside looks to be the more likely scenario.

A break and close above downtrend resistance and the 78.6% Fibonacci (1.7327) is needed to validate the Double Bottom reversal, possibly carving a path for price to surge above the 200-DMA and psychologically imposing 1.76 level. 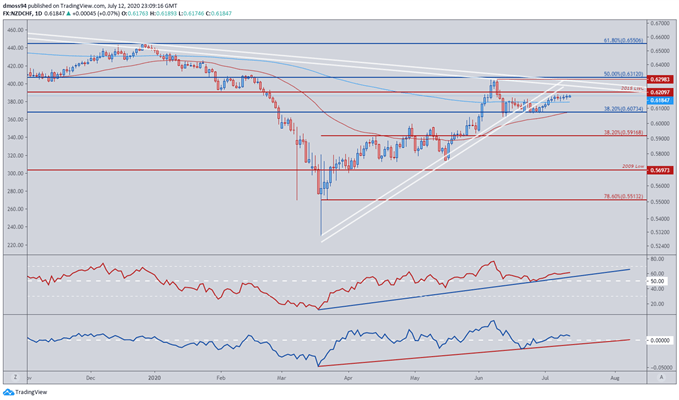 NZD/CHF remains constructively placed above the 200-day moving average (0.6140) as buyers eye a potential retest of the post-crisis high set on June 9 (0.6298).

Although the RSI and Momentum indicators continue to track their respective uptrends, they have notably faded from the extreme readings of last month hinting at exhaustion in the recent rally from the 38.2% Fibonacci (0.6073).