EUR/USD & AUD/USD in Focus Ahead of ECB, Jobs & Retail Sales

As U.S. equity markets stutter against overhead resistance, gold prices break above $1,800 as treasury yields deflate, and volatility continues to linger, traders may struggle to ignore a backdrop of the resurgence in COVID-19 infections, hospitalizations, and deaths. While markets seem to have priced in the best-case scenario for a robust economic recovery, which follows a flurry of fiscal and monetary support, lofty expectations appear to remain disconnected from reality.

The US jobless rate currently sits at 11.1% according to the most recent NFP report, and unemployment insurance claims just topped 33-million last week. The European Union is facing its worst recession since the great depression and still struggling to ratify a 500bln Euro recovery fund. China continues to weather geopolitical tension with key trading partners like Hong Kong, the United States, and Australia.

Given this context, time may be an enemy of market bulls as downside risks linger and threaten to weigh negatively on trader sentiment – particularly if economic data fails to show a sustained improvement. As such, keeping a closer eye on incoming economic data is both prudent and warranted in light of the current macro backdrop. 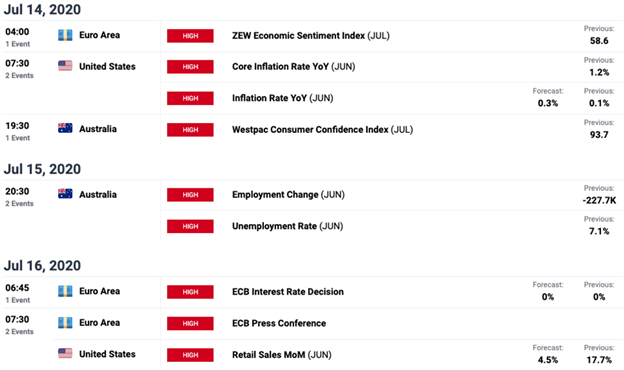 Next week holds several heavy-hitting data prints including CPI inflation and monthly retail sales out of the United States, ZEW economic sentiment and an ECB rate decision for the Euro-Area, plus consumer confidence and employment data for Australia.

That said, one major currency pair to have on the radar next week includes EUR/USD. Market risk tolerance has placed downward on the US Dollar recently, and exacerbated Euro strength in turn, as traders abandon safe-havens like the Greenback.

Along with the previously mentioned economic events on tap, EU leaders are set to hold a summit in the wake of the European Central Bank. The main point of discussion will center around fiscal stimulus plans, which have faced opposition from some EU countries like ‘the frugal four’ despite backing by Germany and France.

Another top FX pair worth watching closely is AUD/USD. Generally speaking, the Aussie-Dollar is known to correlate strongly with the S&P 500 seeing that they both react sharply to changes in appetite for risk. As such, spot AUD/USD price action next week could be geared up for heightened currency volatility amid consumer confidence and labor market data releases. 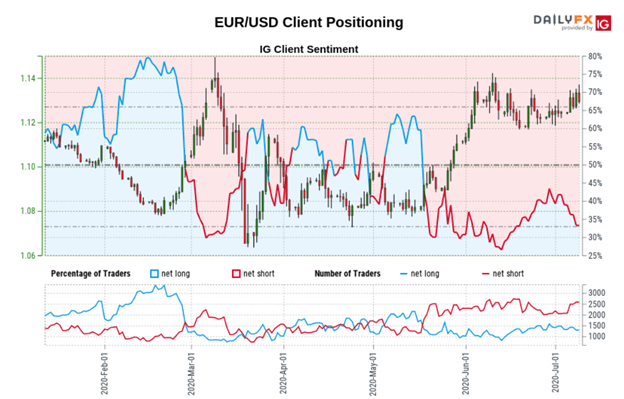 Turning to IG client sentiment for EUR/USD reveals retail traders remain bearish judging by their net-short positioning. This suggests that the Euro may continue to rise, however, as we generally take a contrarian stance to crowd sentiment. As it stands, 40.73% of traders are net-long EUR/USD while net-short positioning is 4.89% higher when compared to last week’s reading. 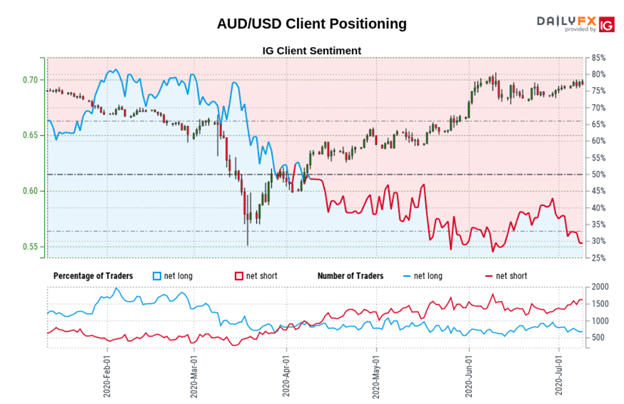 When viewing IG client sentiment data for AUD/USD, only 31.21% of retail traders are net-long, which resonates a bearish bias. This is also emphasized by a 15.48% increase in net-short positioning on the Aussie since last week as the AUD/USD price trend faces pushback. Nevertheless, seeing that we normally take a contrarian view on crowd sentiment, retail FX positioning hints at potential for further upside in spot AUD/USD.