Although the Prime Minister released a separate statement condemning the encroachment, it is becoming increasingly evident that New Zealand wants to ensure the relationship with its biggest trading partner remains fruitful and robust.

Considering the fallout facing her Trans-Tasman counterpart, Scott Morrison, it comes as little surprise that Ardern would look to take a different approach. As the Australian Prime Minister’s calls for an independent enquiry into the origin of Covid-19 were met with the introduction of 80% tariffs on local barley products and a recommendation that Chinese citizens avoid travel to the country.

With China accounting for 23% of New Zealand’s exports and roughly 19% of tourism spending, a break-down in this pivotal relationship would be devastating for the local economy.

However, the ability to address these contentious humanitarian issues without ruffling Beijing’s feathers may see the New Zealand Dollar outperform its major counterparts and continue its climb towards yearly highs. 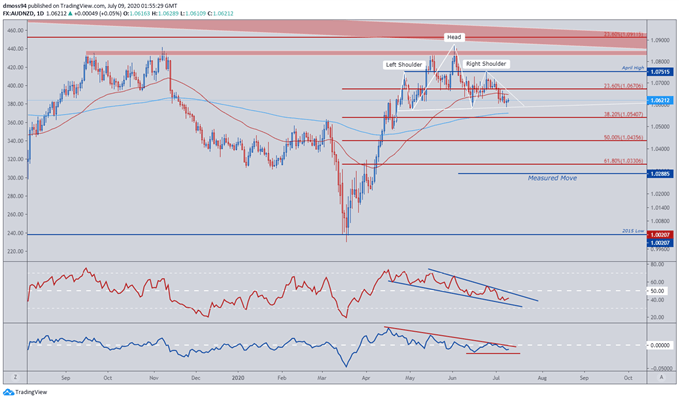 A Head and Shoulders reversal pattern seems to be taking shape just above the 200-day moving average (1.0560), as price sits precariously above the neckline at the 1.06 handle.

A break of the neckline looks more and more likely, as both the RSI and Momentum indicators push lower.

A daily close below the 200-DMA is needed to validate the bearish reversal pattern and may potentially fuel a decline back towards the 61.8% Fibonacci, with an implied move suggesting AUD/NZD may fall as far as the 1.03 handle. 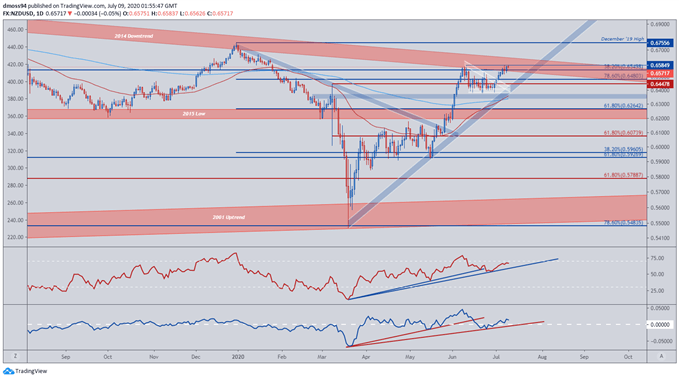 The NZD/USD exchange rate’s topside break of Descending Triangle consolidation pushed price back above the 38.2% Fibonacci (0.6550) to test the post-crisis high set in mid-June (0.6585).

Although the Momentum indicator continues to strengthen into positive territory the development of the RSI hints at the potential for a short-term correction back to support at the 78.6% Fibonacci (0.6480), as the oscillator struggles to climb into overbought territory.

A daily close above resistance at the June high (0.6550) may encourage buyers and carve a path for NZD/USD to test the December high (0.6755).

On the flipside, a break and close below the March high (0.6448) could signal a resumption of the long-term downtrend extending from the 2014 highs, potentially leading to a sharp decline back to support at the 200-day moving average (0.6335)