Hong Kong’s Hang Seng Index (HSI) stock market benchmark is consolidating for a second day, finding support at 26,000 – the 61.8% Fibonacci retracement level. Negative sentiment from the US overnight is dampening risk appetite across the Asia-Pacific markets, with Covid-19 virus resurgence in North America and India in focus. Australia’s Victoria state premier has re-imposed Stage 3 stay-at-home restrictions for 6 weeks, underscoring the impact of a second viral wave on economic recovery.

Sector-wise, the Hang Seng constituents are trading mixedmid-day. Communication services (+2.62%), consumer staples (+2.54%) and information technology (+1.41%) leading the gains while consumer discretionary (-1.13%), industrials (-0.51%) were among the worst performers (chart below). 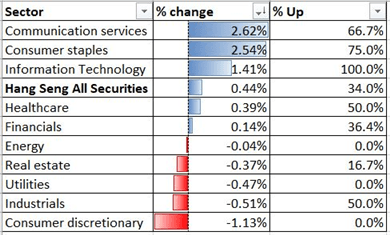 There are talks about a possible break of the Hong Kong Dollar (HKD) trading band this morning, with some White House advisors reportedly proposing to undermine the USD/HKD currency peg in order to punish Beijing for imposing a new security law on the city. USD/HKD was little-moved on the newshowever. It is trading firmly at 7.750 – the lower bound of the currency peg – as HKD remains in demand. Capital was seen to have poured into the HKD-denominated assets in the past few weeks, which partially explained the rally in the Hong Kong stock market.

Besides, the Hong Kong Monetary Authority (HKMA) has sufficient dry powder to defend the currency peg if needed. The central bank has US$ 437 billion worth of foreign reserves, or 121% of Hong Kong’s nominal GDP (chart below). 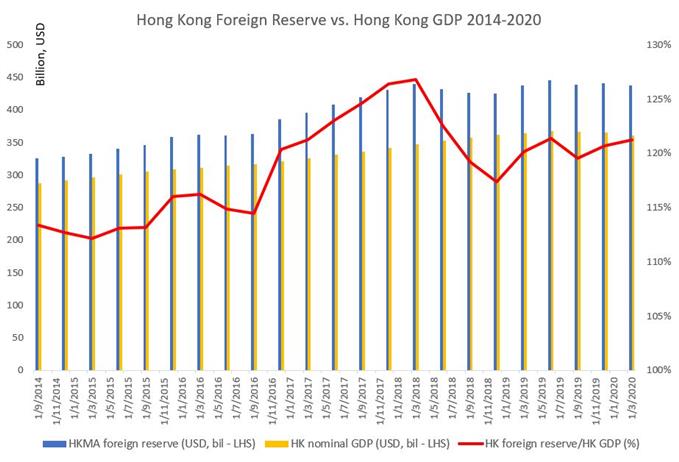 Technically, HSI has broken above a key resistance at 26,000 with strong volume on Monday, and subsequently entered into consolidation. The previous resistance is now becoming an immediate support level, and thus holding above 26,000 is critical in the next few days. The RSI indicator was overbought on Monday and thus suggested a technical correction is likely. The overall trend remains bullish as the 10-day, 50-day and 100-day Simple Moving Averages (SMAs) have likely formed a ‘Golden Cross’.

Singapore’s Straits Times index (STI) stock market benchmark followed US markets lower on Wednesday, trading at 2,650 with relatively thin volume. Investors are probably sitting on the sidelines ahead of a nation-wide election on Friday. Once the political skies clear, the stock market will likely find its own direction and start to move in tandem with the rest of Asia.