Tale of the Tape: RBA vs RBNZ

The differing views between the Reserve Bank of Australia (RBA) and Reserve Bank of New Zealand (RBNZ) have been a major driver in the Australian Dollar’s recovery against its Trans-Tasman counterpart.

From a policy standpoint the RBNZ seems more open to the implementation of alternative monetary policy programs, with the central bank in ongoing “discussions with financial institutions about preparing for a negative OCR”.

In contrast, the RBA has held its view that the current official cash rate (OCR) is “now at its effective lower bound” of 0.25% with committee members declaring “no appetite for negative interest rates in Australia”.

Although both central banks are currently enforcing an OCR of 0.25%, the possibility of the RBNZ cutting the cash rate into negative territory next year may continue to be a significant headwind for the New Zealand Dollar’s performance relative to its Australian cousin.

However, the AUD/NZD exchange rate has notably declined in recent weeks, falling 2.75% from fresh yearly highs to technical support at the 50-day moving average.

This pullback could be attributed to a 12-day surge of new coronavirus cases in Melbourne, Australia’s second most populous city, leading to the re-imposition of lockdown measures in affected suburbs.

Having said that, the spike in infections not only affects the local economy but jeopardizes the introduction of the ‘Trans-Tasman travel bubble’ to support the butchered tourism and travel industries of both nations.

To that end, Australian lockdown concerns may be dampening AUD strength and opening the door for NZD to claw back lost ground, although it’s doubtful that this is the major fundamental factor driving the exchange rate lower.

Without question, both tourism-heavy economies have been hit extremely hard as lockdown measures and border restrictions are enforced to suppress the global pandemic.

Differing stances on future monetary policy aside, both central banks are implementing very similar approaches to support the economy with the same interest rate regime (as mentioned above).

Therefore, a quick glance at what truly drives the trade-sensitive currencies suggests that commodity prices may drive AUD/NZD for the foreseeable future. 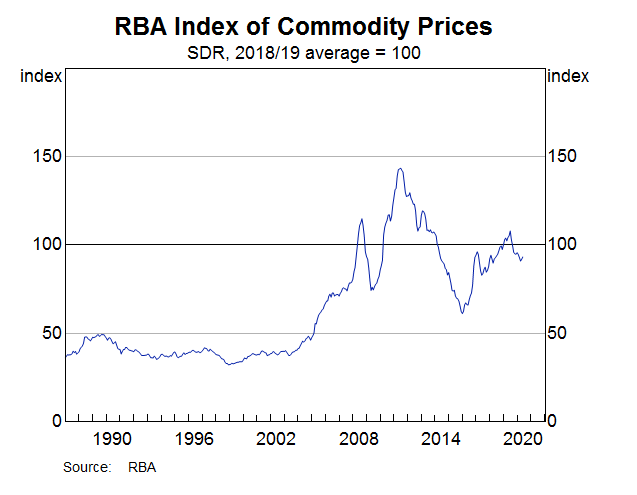 Iron ore and coal exhibit strong positive correlations with the Australian Dollar, and account for half of the overall weighting in the RBA’s “Index of Commodity Prices”.

The notable decline seen in both commodities seems to be fueling AUD’s descent as iron ore drops back below $100 per/ton.

By contrast, the agriculture-sensitive New Zealand Dollar may be getting a boost from a surge in dairy prices as the Global Dairy Trade (GDT) price index recorded its largest positive change since the start of the year.

This stellar increase could be a short-term driver for the resurgence of the New Zealand Dollar relative to its Australian counterpart.

As it stands, AUD/NZD seems poised to move lower as it carves out a potential Head and Shoulders reversal pattern at a key inflection zone.

A short-term recovery from the 50-day moving average (1.0653) fizzled out at the April high (1.0751) on June 24, forming the pivotal right shoulder of the bearish pattern.

Due to the somewhat slanted nature of the potential neckline a daily close below the 1.06 handle may prove necessary for bearish validation.

With an implied move suggesting a retracement to the 61.8% Fibonacci (1.0331) the coming days price action could prove pivotal for buyers. A daily close above the April high (1.0751) seems needed to invalidate the Head and Shoulders reversal. 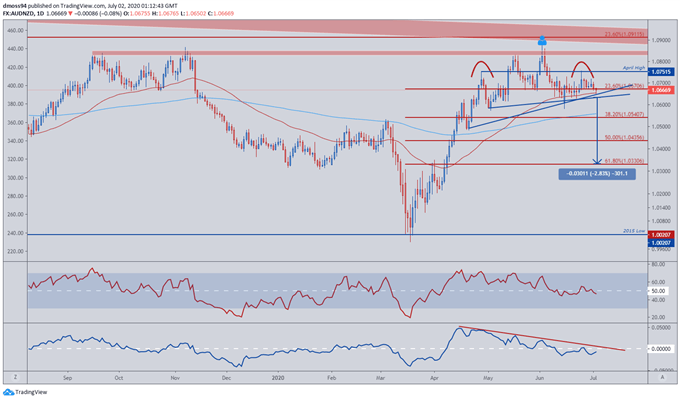