A better-than-expected US pending home sales data print helped to underpin market confidence after Friday’s rout, sending US equities broadly higher on Monday. The Dow Jones index registered its largest gain seen in two weeks, surging 2.32%. Boeing soared 14.4% after the Federal Aviation Administration allowed test flights for the 737 Max – the company’s flagship product that has been grounded for more than a year. Boeing contributed to 192 points, or 33% of the index’ overnight gain.

The sustainability of this rebound, however, is likely to remain in doubt amid surging virus numbers around the globe. The US saw 81,268 new infections yesterday, marking a 3.19% increase in total cases. Alarming numbers render this rebound vulnerable to a pullback. 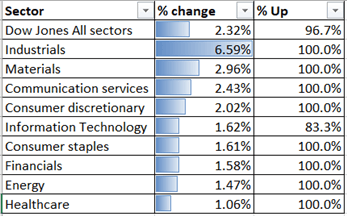 The Dow Jones remains in a descending channel (chart below) formed since early June, and is challenging key resistance at 25,700 – the upper ceiling of the channel. Immediate support can be found at 25,130 – the 100% Fibonacci extension. 25,130 serves as a promising support as it has been prove-tested three times in June.

A failure to break out above 25,700 will probably be followed by a deeper correction, as the index has formed ‘lower highs’ since early June. The MACD indicator suggests that momentum is skewed heavily to the downside.

The Nikkei 225 index, Japan’s stock market benchmark, has entered into a consolidation phase, ranging between 22,000 to 22,770 over the past two weeks. The index has mostly recovered from the sharp decline seen in Feb-Mar due to virus outbreak, and it is now only yards away from its multi-year high of 24,000. As concerns of a second viral wave rose around the globe, the Japan stock index has naturally went into consolidation, waiting for fresh catalysts to paint a clearer macro outlook.

Technically, the 76.4% Fibonacci retracement level of 22,000 serves as an immediate support whereas 22,770 remains a key resistance.

Investors are eyeing China’s official manufacturing PMI data for clues of a recovery from the world’s second largest economy. Market participants anticipate the reading to ease to 50.4 in June from 50.6 in May, extending its fourth consecutive month of expansion. Domestic demand was the bright spot in last month’s reading and is likely to remain so in June. Beijing has been walking a fine line between balancing a recovery with pandemic control, allowing majority parts of the country to resume business activity despite sporadic lockdowns in places with new clusters.

The People’s Bank of China (PBoC) has maintained an accommodative monetary policy and guided lending rates lower since the beginning of the Covid-19 pandemic. Besides, fiscal stimulus aiming to reduce corporate burden and counter-cyclical adjustments have been put in place to support growth.

Looking ahead, a string of Asian Markit PMIs are due to be released on July 1st, including Indonesia, Philippines, South Korea, Taiwan, Thailand and China. Manufacturing sentiment across these economies has rebounded sharply in May from the trough in April (chart below). June’s release will help gauge the depth of a second-quarter fallout. 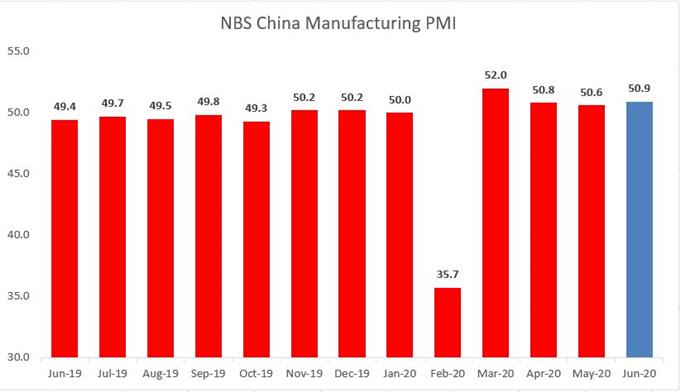 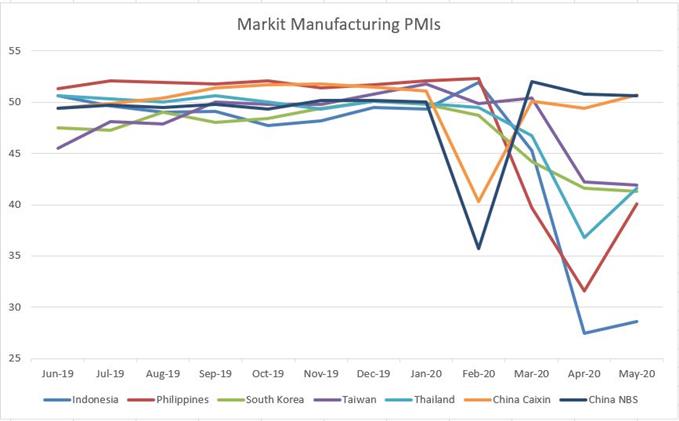 Hang Seng Index – Technical Analysis: The Hang Seng index failed to break out above 25,000 – a key resistance level – for a third time last week. The Hong Kong benchmark is consolidating between 24,000-25,000 and may remain so in the days to come. Echoing Wall Street’s rally, the Hang Seng index is set to open mildly higher at around 24,470, according to the futures market.