Since the crash in Q1 there has been a correlation surge among multiple assets, most notably the strong link between the equity and currency markets, which has been highlighted in both the 1 and 3-month rolling correlation matrix. That said, we see risk sentiment among the main drivers across the currency space, which will likely remain the case for the foreseeable future. With this in mind, the recovery in risk appetite and by extension the move higher in risk-sensitive currencies, in particular, AUD & NZD, have prompted their respective central banks to begin talking down the currency to keep financial conditions loose.

RBNZ Among the Most Dovish Central Banks

Overnight, the RBNZ announced its latest monetary policy decision and while the central bank stood pat on monetary policy as expected. The central bank had explicitly mentioned the strength in the Kiwi, stating that a rising NZD has put further pressure on export earnings. Therefore, with the RBNZ also actively looking at potentially topping up their LSAP program (risk of QE boost set in August) the central bank looks to be attempting to place a cap on further upside in NZD. As such, risks lie with underperformance in NZD vs AUD and CAD. 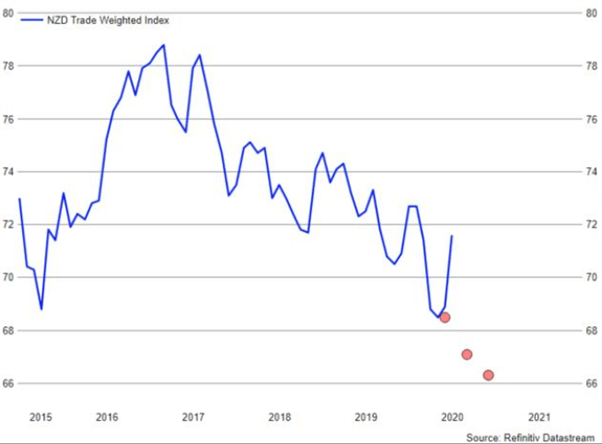 US Dollar Remains a Safety Play

As we had highlighted previously, the US Dollar remains a currency in demand during times of risk-off with the US Dollar and S&P 500 negative correlation continuing to hover around multi-year highs (shown in the chart below). In turn, RORO flows (Risk On – Risk Off) are likely to remain a dominant driver in the FX space. While bouts of risk aversion could see the US Dollar supported, the broader economic recovery in the absence of a material threat of a second wave of COVID-19 could see the US Dollar depreciate notably in the longer term. 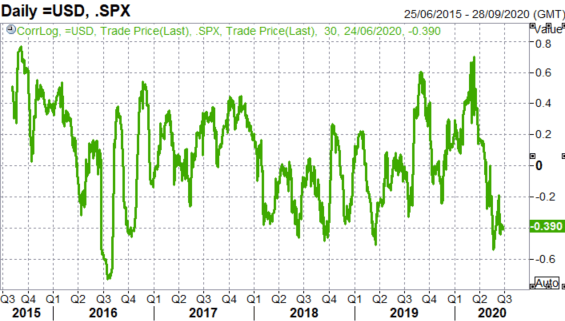