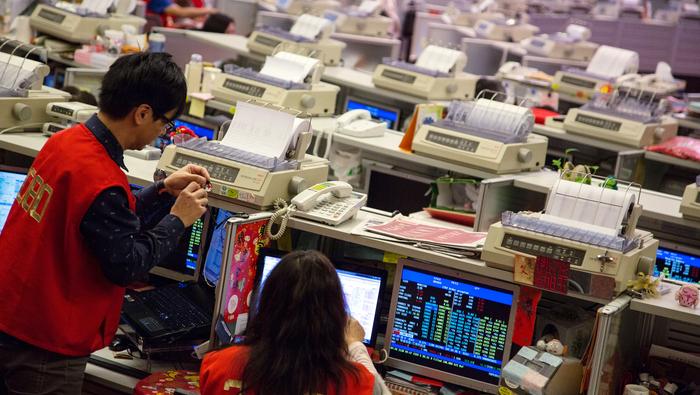 Asia-Pacific stocks rebounded after opening the week on a sour note but rising concerns about a second virial wave in the US threatens the prospect of an economic recovery and risk sentiment.

US index futures traded lower on Monday morning, setting a sour tone to Asia-Pacific markets’ opening. Sentiment has since recovered, but investors still seem to be increasingly wary about the US stock market rally as it seems to have diverged too far from the real world, resulting in a market correction. Signs of a possible resurgence of coronavirus in parts of the US, after easing of lockdown measures, further dampened the prospect of a smooth economic recovery.

Market participants scrutinized a resurgence in virus cases in part of the US and how it could impact the jobs market. The key question is, will a potential second viral wave harm the fragile recovery if a setback in opening-up is necessary to contain the virus spread?

More worrisome is the development in emerging economies, namely Brazil, Russia and India, in which virus cases are rapidly surging. Compared to the developed countries, emerging countries are more vulnerable to Covid-19 pandemic, due to a lack of healthcare recourses and reluctancy to report new cases. According to The Economist, the emerging world accounts for ¾ of new confirmed covid-19 cases in early June.

Technically, the US S&P 500 index stock market benchmark remains in an ascending channel (chart below) formed since early April. Its 20- and 50-Day SMA are both trending up, suggesting upward trend is intact. Recently, it has likely formed a ‘lower high’ as the price failed to breakout a strong resistance at 3,200. This is in line with a swing in risk sentiment as traders are increasingly concerned about a virus resurgence.

The index has entered into a consolidation, with immediate resistance level found at 3,180 – the 161.8% Fibonacci extension level. A pullback below the lower bound of this channel, which is now at around 3,000, will probably lead to a more meaningful correction.

Today, the risk-sensitive Australian Dollar opened lower at 0.6813 and since climbed higher to 0.6841, suggesting a slight recovery in sentiment. Still, traders might remain vigilant on signs of economic headwinds, trade disputes and geopolitical complications. In the day chart, the AUD/USD has fallen from recent high of 0.7064 and started to form a ‘lower high’. Immediate support level could be found at 0.6770.

IG client sentiment shows that more retail traders are a having a net-short position on the AUD/USD pair (chart below). 37.08% of traders are net-long with the ratio of traders short to long at 1.70 to 1. The number of traders net-short is 10.76% lower than yesterday and 10.02% lower from last week. 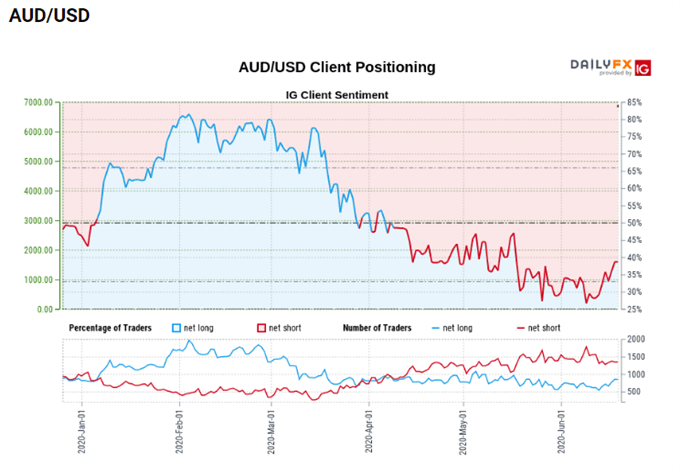 News surrounding Hong Kong’s security law draft has tested investors’ nerve over the weekend, though it is unlikely to have a material impact to the stock market. A majority of Hang Seng Index’s constituents are mainland companies, which helps to stabilize the index and cushion against external headwinds.

Technically, the Hang Seng Index stock market benchmark climbed up from initial losses on Monday. The index found a strong support level at 24,000 – the 38.2% Fibonacci retracement. Its 20-, 50- and 100-Day SMA is about to form a ‘golden cross’ near 24,000, which suggests more upward potential in the mid to long term.

Singapore’s Straits Times Index stock market benchmark erased earlier losses and traded higher on Monday. Singapore has entered into a ‘phase 2’ circuit breaker on last Friday, and consumers flocked into shopping malls, restaurants and streets during the weekend. This is a good sign for economic recovery but also raises concerns about a potential second wave of infection.

Technically, the Straits Times Index has likely found a support at 2,603 – the 38.2% Fibonacci retracement level. Its 50- and 100-Day SMA are also crossing near 2,600, providing a solid floor for a consolidation.