It’s safe to say that recent market optimism and US Dollar weakness has greatly benefitted the New Zealand Dollar, as it recovered from the fresh 5-year lows it set in March.

However, this recent surge has stalled despite Prime Minister Jacinda Ardern lifting coronavirus restrictions on Monday in response to the eradication of active COVID-19 cases.

With NZD sitting at a pivotal level, Wednesday’s FOMC meeting may define the future direction of the risk-sensitive asset. 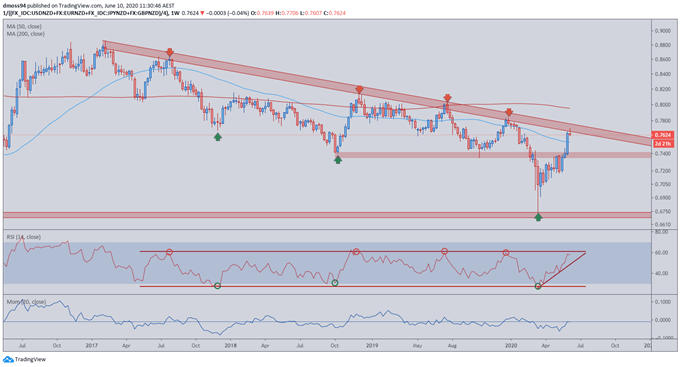 The New Zealand Dollar has had a tremendous run against its major counterparts since plunging to fresh five-year lows in March, climbing as much as 15% to fall just shy of the yearly high (0.7776).

Prices surged back above former support at the 2018 low (0.7401) to test a resistance zone that has capped upside potential since January 2017 and may continue to present a formidable challenge for the trade-sensitive currency.

Recent development of price, alongside RSI, is eerily similar to the four previous occasions that NZD pushed to test the 2017 downtrend, with the premature development of a Shooting Star candle possibly signalling an impending reversal of the three-month rally.

The reaction of RSI may provide an early indication of inflection, should it remain confined by channel resistance, with a failure of price to breach trend resistance possibly confirming a resumption of the long-term downtrend. 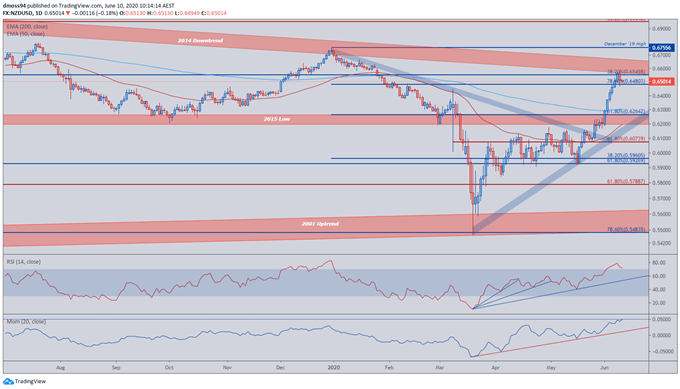 NZD/USD surge back to levels not seen since January has pushed RSI into overbought territory for the first time this year, with momentum recording its most extreme positive readings since 2016.

However, failure of price to close above key resistance, at the convergence of the 38.2% Fibonacci (0.6550) and the 2014 downtrend, may trigger a reversal of the 3-month rally.

Nonetheless, the development of price in the coming days could determine the short-term future of NZD against its USD counterpart. 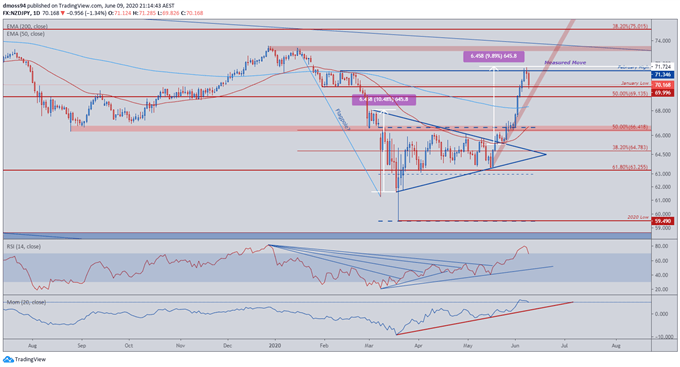 A break of Symmetrical Triangle resistance in late-May ignited buyers, as NZD/JPY surged just shy of 10% and burst into overbought territory.

Fulfillment of the measured move led price to briefly breach the February high (71.346) before capitulating to support at the January low (70.119).

With RSI U-turning back below 70, a more sustained retracement may be on the cards, as bearish divergence of momentum signals exhaustion in the recent explosive rally.