ASX200 Climbs to Post-Lockdown Highs Even though Australia Contracts

The ASX 200 has started off June at quite a pace even though the contraction in 1Q GDP paves the way for Australia’s first recession in 29 years, with the index climbing 5% from the monthly open.

After falling as much as 40% from the record-high, the Aussie benchmark index now has the 200-day moving average (6,333) firmly in its sights as it climbs as much as 37% from the March low (4,387). The recovery can be attributed in part to the successful suppression of COVID-19 infections, which allowed states and territories across Australia to reopen earlier than expected, along with the gargantuan fiscal and monetary stimulus packages that were unveiled to combat the economic shock from COVID-19.

However, the threat of a protracted recovery may become a concern for investors as the Reserve Bank of Australia expects “a contraction in GDP of around 10 per cent over the first half of 2020,” while government-sponsored programs, like the JobKeeper and JobSeeker initiatives, are set to expire in September.

Although the panic-buying seen in March saw household spending on food grow 5.7% in 1Q, overall household consumption still recorded the biggest quarterly fall since 1986 (-1.1%). With households making up over 50% of the Australian economy the record reduction is hardly positive and highlights the fragility of the recent rally.

Considering net export growth and government spending prevented 1Q GDP contracting as much as 1.1%, the return of consumer confidence remains pivotal to the successful recovery from the “biggest economic contraction since the 1930’s.” 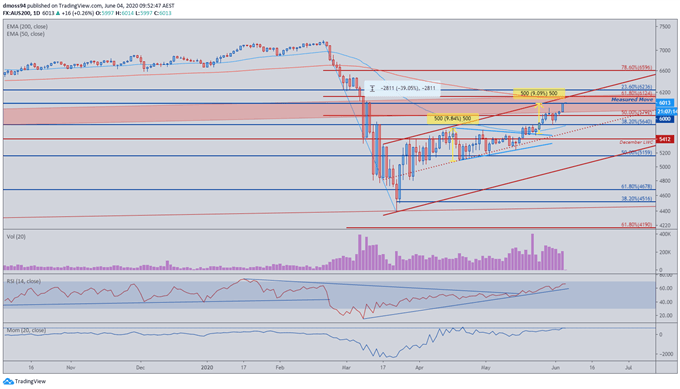 The ASX200 has confirmed a breakout of the Symmetrical Triangle pattern that confined price for much of May, fulfilling its measured move target as it breaches the psychologically pivotal 6,000-handle.

Technical studies may provide an early indication of what’s next for the Australian benchmark, as price climbs to within touching distance of the 200-day moving average (MA) and the 61.8% Fibonacci retracement (6,124).

The development of the Relative Strength Index (RSI) may encourage buyers as it strengthens back to levels not seen since January and flirts with entry into overbought territory. However, a correction of the recent rally could be on the card should the oscillator fail to push into extremes above 70.

With momentum displaying a degree of bearish divergence, and volume fading throughout the ASX200’s hike from the May 25th low (5,476), the probability of prices pushing through the 6,100-handle looks to be minimal.

A period of consolidation may see prices slide back towards former resistance-turned-support at the 5,800-handle, with RSI breaking its constructive 3-month trend possibly re-invigorating sellers and pushing prices back to the April high (5,590).