The Australian Dollar lost ground after trading at its highest levels since January as Australia’s 1Q Gross Domestic Product (GDP) report signals the end of a 28-year run of economic expansion.

Despite beating market expectations for a 0.4% contraction, the 0.3% decline in the growth rate is almost certainly to be followed by a drastic contraction in the second quarter of 2020, which would push Australia into a technical recession. So far, this news has only dampened the recent surge in AUD/USD, with the exchange rate appreciation as much as 27% from the March low (0.5506).

Nevertheless, the 1Q GDP report helps to confirm the views expressed by the Reserve Bank of Australia as Governor Philip Lowe insists that “the depth of the downturn will be less than earlier expected.” With the reality that most of the fallout from COVID-19 occurred during the current quarter, the lagging nature of the GDP report doesn’t provide the most accurate roadmap.

In turn, second quarter data will illuminate to greater detail the overall contraction suffered by the local economy and provide an accurate baseline to measure true economic progress. 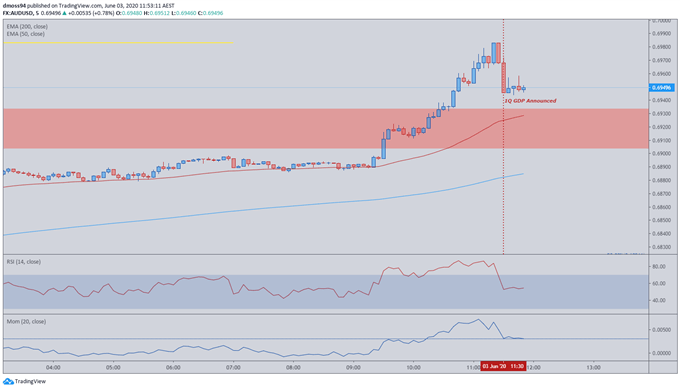 Recommended by Daniel Moss
Forex for Beginners
Get My Guide

Nevertheless, attention will remain focused around the strength and speed of the local economic recovery as social distancing restrictions are gradually relaxed. The “substantial, coordinated and unprecedented easing of fiscal and monetary policy” seems to be successfully nursing the economy through the “biggest economic contraction since the 1930’s” as the local manufacturing industry bounces back from the largest single-month drop on record in April, while the unemployment rate has fared better than market expectations, despite jumping to a 5-year high (6.2%).

However, a degree of luck has also sheltered Australia from the brunt of the COVID-19 fallout as Vale, one of the biggest iron ore producers in the world located in Brazil, suffers from infectious outbreaks among its workforce. These outbreaks have forced the Brazilian conglomerate to continue operations with minimal staff, severely disrupting production and presenting an opportunity for Australian mining companies to fill the gap.

The surge in iron prices has helped propel the AUD back to its January-highs as the rebound in Chinese manufacturing has increased demand for Australia’s main and most valuable export. Although this pivotal relationship has been tested in recent weeks, the announcement of China’s largest stimulus package since 2008 should continue to fuel demand for iron ore as the world’s second largest economy looks to restore economic activity to pre-crisis levels. 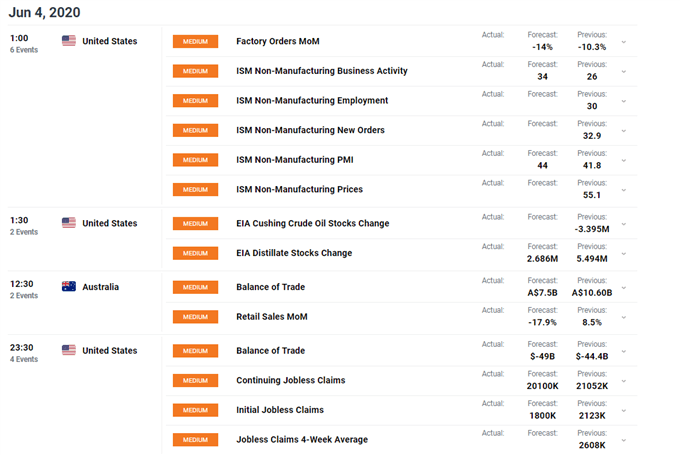 Looking forward, attention will turn to ISM Non-Manufacturing data along with the Factory Orders report coming out of the US, with the service sector expected to face most intense slowdown since 2009.

Continuing jobless claims data will provide a thermometer of the US jobs market ahead of the Non-Farm Payrolls (NFP) report, with expectation of a slight decrease in the number of claims as states continue to roll back restrictions.

Australian retail sales may also be of interest as the social distancing restrictions enforced in April could see a record print of -17.9%.