The Australian Dollar nudged higher after the Reserve Bank of Australia (RBA) kept the official cash rate (OCR) and the three-year yield target unchanged at 0.25%.

Despite the Australian economy “experiencing the greatest economic contraction since the 1930’s,” the RBA continued to highlight the possibility that ‘the depth of the downturn will be less than earlier expected.”

Looking ahead, the RBA insists that the recovery following the pandemic “will depend on the confidence that people and businesses have about the health situation and their own finances,” with the central bank reiterating its commitment to “do what it can to support jobs, incomes and businesses.”

As governments across Australia gradually roll back the lockdown laws, it seems as though the RBA will retain the status quo and keep the cash rate on hold “until progress is being made towards full employment.” 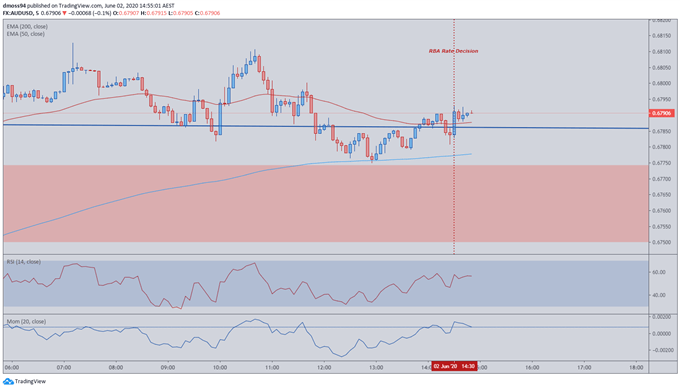 Nevertheless, escalating US-Sino tensions continue to pose a threat to the trade-sensitive AUD as China orders major state-owned agricultural companies, Cofco and Sinograin, to temporarily cease purchasing of U.S imports inclusive of soybeans. This is the latest in a tit-for-tat exchange between the world’s two biggest economies and could lead to complete abandonment of the already shaky phase-one trade deal signed in January.

These draconian tactics enforced by Beijing are not limited to the US, with Australian meat and barley dragged into the crosshairs after Prime Minister Scott Morrison called for an independent investigation into the origin of COVID-19.

So far, this action has had little effect on the strength of the Australian Dollar due to the minimal impact these tariffs have on total exports to China, although the situation could drastically deteriorate should iron ore or coal get dragged into the picture. 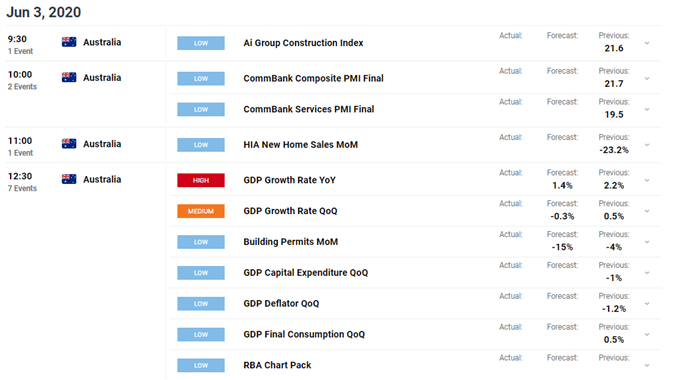 Market participants now look to Australia’s 1Q GDP report, which will not only show the depth of the total fallout from the pandemic-imposed restrictions but also the possibility that a 28-year period of economic growth could be coming to an end as the RBA sees the growth rate contracting 10% in the first 6 months of the year, with most of the slowdown in economic activity occurring in the second quarter of 2020.

With the technical definition of a recession being two consecutive quarters of negative growth, a contraction in 1Q GDP would pave the way for Australia’s first recession since 1991.