The Australian Dollar has pushed back above the March high (0.6685) as the Caixin Manufacturing PMI update for May beat market expectations (50.7 vs 49.6 forecast) and signaled growth within the hard-hit sector.

NBS Non-Manufacturing (53.6) and Manufacturing PMIs (50.6) released over the weekend, although slightly missing forecasts, were also upbeat and may provide some light at the end of the tunnel for those economies still restricted due to the COVID-19 outbreak.

With export orders registering five consecutive months of contractionary prints (below 50.0), focus will turn to the fiscal response announced at the National People’s Congress and whether Beijing’s largest stimulus package since the 2008 global financial crisis (GFC) will be enough to continue supporting the local economy as global demand remains at historically low levels. 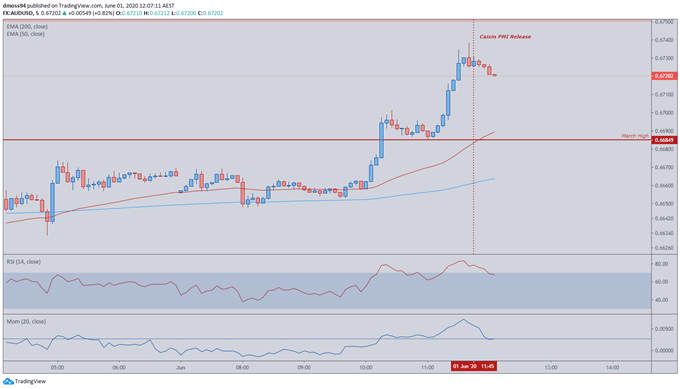 Price action reflects the inconsequential nature of the most recent PMI release from China, as the AUD begins to lose ground gained earlier in the session. This may be due to the market’s broad reaction to President Donald Trump’s speech over the weekend regarding China, and his lack of specifics around possible counter-measures to the introduction of Beijing’s security law in Hong Kong.

Recommended by Daniel Moss
Forex for Beginners
Get My Guide 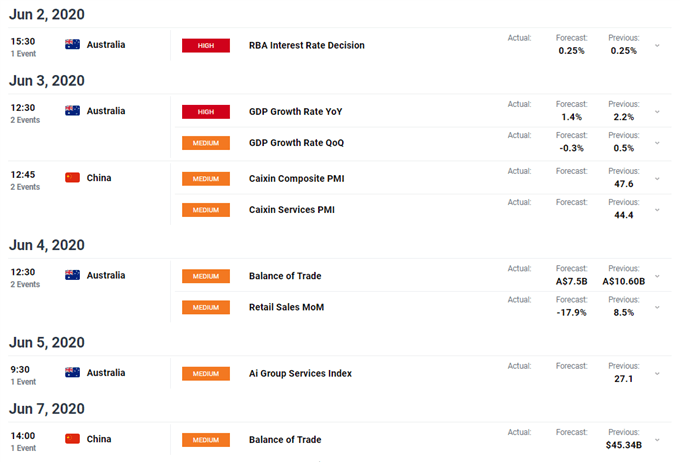 Despite the increasing tensions between the US and China, the Australian Dollar has been incredibly resilient on its run back to pre-crisis levels, up as much as 22% from the March low (0.5506) as it now begins to test the key resistance zone at the February-highs (0.6750 – 0.6775). Investor attention now turns to the RBA interest rate decision tomorrow, with the expectation that the Australian central bank will keep the official cash rate (OCR) and three-year bond yield target at the record low of 0.25%.

Governor Philip Lowe and his committee members have been relatively upbeat compared to their major counterparts, and should this positivity continue we could see the AUD/USD exchange strengthen further, with the 0.70-level a key area of interest. However, with the relationship between China and Australia becoming increasingly strained over calls for an independent investigation into the origin of COVID-19, future retaliatory tariffs on Australian exports could have devastating consequences on an economy that relies on China for 31% of its yearly exports.

US-Sino developments will be key to the long-term direction of the AUD, with any escalation possibly bringing the strength of the local currency to an abrupt halt.