The Hang Seng Index sits in a precarious spot following the worst one-day price drop since 2015 on Friday as tensions between China and Hong Kong intensify. Friday’s drop was largely the result of Beijing announcing it would quickly move forward with an anti-sedition law aimed at stemming ongoing protests in Hong Kong. The semi-autonomous country has seen mass protests since 2019 when Hong Kong’s security Bureau attempted to pass extradition laws that were met with grave concern over China’s increasing grip on the country. 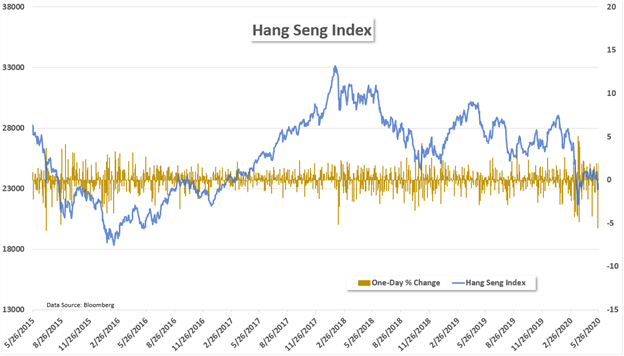 Wednesday will mark a critical point for tensions in the country as protestors plan to hold a mass demonstration, expected to be the largest in months, in opposition to a controversial national anthem bill. Furthermore, tensions between China and the United States are moving back into the spotlight. President Trump sent a warning to Beijing that there would be retaliation should China interfere with Hong Kong’s democratic process.

Given the political turbulence expected in the weeks ahead along with the planned mass protests, volatility in the Hang Seng index could continue for the near future. However, a spillover effect into the broader macro landscape is possible, especially if the protests in Hong Kong draw more international attention and condemnation towards China.

Turning to the technical picture in the index, price action recovered marginally through Tuesday this week, making up a part of the previous week’s losses. Still, the current level in the index stalled out once it reached earlier points of support from late April through May, suggesting bulls are struggling to retake this price point.