The United States stock market has enjoyed a strong recovery from the initial shock of the coronavirus outbreak. In this rebound, the Dow Jones, Nasdaq 100 and S&P 500 have each reclaimed notable price points and technical levels, but one sector has climbed head and shoulders above the rest. This dynamic is easily visible in the performance of the Nasdaq 100 compared to the Dow Jones as the technology industry leads the charge higher.

The phenomenon is also visible in the ratio of the S&P technology sector to the S&P 500 industrials sector shown above. While technology growth has been outpacing industrials for some time, the divergence between the two really gains pace in March, which directly coincides with the steepest declines experienced by the Dow Jones and Nasdaq 100.

So, while the relative performance of the two sectors is nothing new, can one sector singlehandedly drag the broader indices higher indefinitely? Or will the rally begin to sputter out on fears of weakness in the underlying economy – despite tech strength? 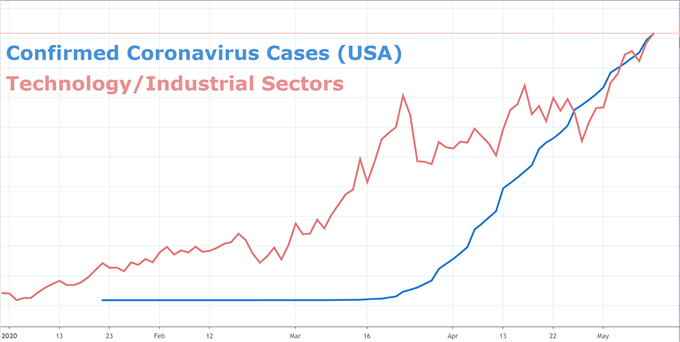 Unfortunately, these questions are exceedingly difficult to answer, but we can make the claim the underlying economy and many industries are likely far weaker than what the S&P 500 is displaying. As a counterpoint, many analysts would be quick to argue “the stock market is not the economy,” but surely a vast majority would concede it is heavily based on economic productivity.

Therefore, the recent slowdown in the rebound rally could suggest market participants are becoming a bit more apprehensive on a continuation higher without a larger economic follow-through. Since some cities and states have begun easing quarantine restrictions, economic contraction may begin to ease, but the data that would reflect such an easing has not yet revealed the depths we reached at the height of lockdown.

Thus, investors will not have insight on the pace of economic recovery for a while longer so there exists the possibility that sentiment is damaged when the data is released and the economic carnage is revealed in full. Alongside a Dow Jones struggling with technical resistance, one could begin to argue the Dow Jones and S&P 500 may be due for a leg lower in the coming weeks, while the Nasdaq 100 clings to the relative strength in technology stocks. In the interim, follow @PeterHanksFX on Twitter for updates.