The Australian Dollar and the ASX 200 equity benchmark remained fixed on looming US labor market data on Friday, with the Reserve Bank of Australia’s repeated pledge not to raise interest rates until the coronavirus’ effects have passed having little effect.

The RBA’s monthly monetary policy statement was not substantially different in tone from that which accompanied its decision to leave the key Official Cash Rate alone at its record low of 0.25% this month. The central bank of course noted the contagion’s terrible effect on the global economy, but predicted that the knock-on 6% fall in Australian gross domestic product which it predicts for 2020 will be reversed in 2021.

The jobless rate is expected to have nearly doubled in the year’s first half but, again, the RBA expects it to recover fairly quickly. Consumer price inflation has been stubbornly low in Australia for a couple of years, but the RBA expects to see it back within the 2-3% target range by the second half of 2021. It seems that interest rates will not rise until that is durably the case.

Of course, like all major markets, Australia is looking ahead to official US jobless figures, still arguably the key single event in the monthly global data round. A horror show is expected, with more than twenty million jobs expected to have gone, but the market has been well primed for this by other numbers already released.

AUD/USD had inched up as Friday’s Asian session got under way, and the process continued after the RBA release.

The ASX 200 meanwhile has risen appreciably as have other risk-correlated assets from its virus-inspired March lows. Investors liked the massive monetary and fiscal responses seen around the world and are hopeful that various economies will now emerge gingerly from lockdowns. However, the prospect of just such terribly weak economic numbers as the US seems likely to provide later has given investors pause, as can be seen in the broad range trade now dominant for the ASX. 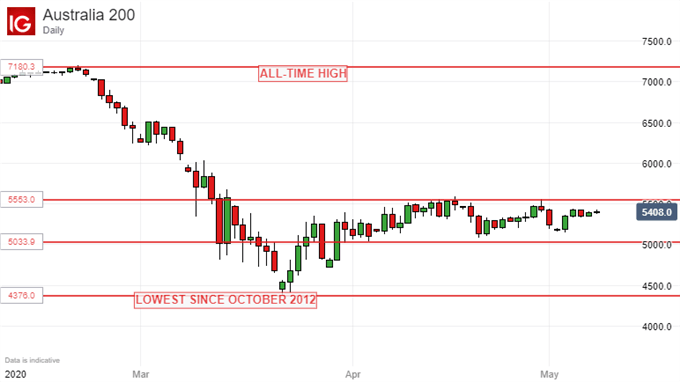