The Dow Jones recently pulled off from the underside of a trend-line from 2016 and has potential to post a lower-high if it can’t get into gear here soon. A breakdown below the Monday low at 23361 will give this idea some legs, with 22941 next up as support to watch. A drive higher won’t put the Dow in the clear should it do so, not only is there trend-line resistance from 2016, but also the gap from March 6/9. If US markets were to charge higher watch for any divergence that may develop between the Dow and S&P 500/Nasdaq 100. A higher high in the other indices without the Dow would be a solid warning sign, especially given the resistance it faces. 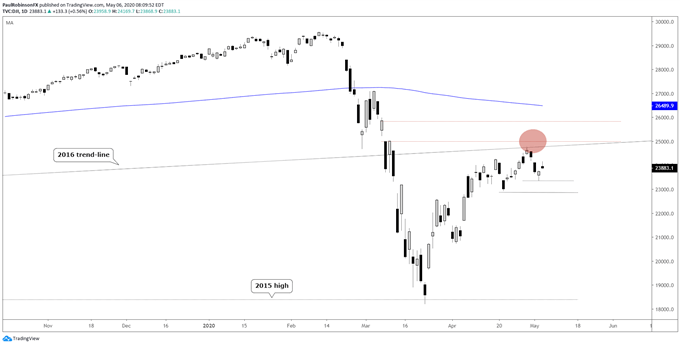 The DAX is not positioned real well here, with it having it hit its head on the underside of the 2011 trend-line and declining quickly after. The current bounce looks like it could result in a lower-high. If this is the case then support around 10200, which was tested numerous times for a couple of weeks last month, will become very pivotal to the outlook. A break below may quickly usher in a move towards 9550/350.

Recommended by Paul Robinson
Check out the mid-Q1 Equities update.
Get My Guide 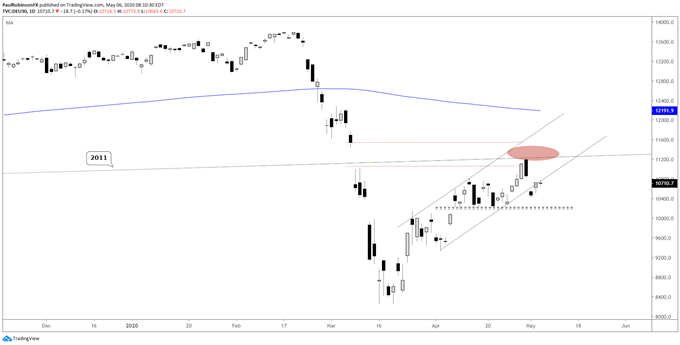