The Euro is still losing ground against the US Dollar Wednesday but is relatively stable against the British Pound despite a ruling Tuesday by the German Constitutional Court that the European Central Bank must justify bond buying under its asset-purchase scheme within three months or lose the Bundesbank as a participant.

Italy’s Prime Minister Giuseppe Conte attacked the decision in a newspaper interview, saying that ECB independence is key to the foundations of the European Union and no constitutional court should decide what it can do.

EUR/GBP is also shrugging off data showing that orders for German industrial goods collapsed in March to their lowest level since records began in 1991 as coronavirus lockdowns reduced demand for German products. 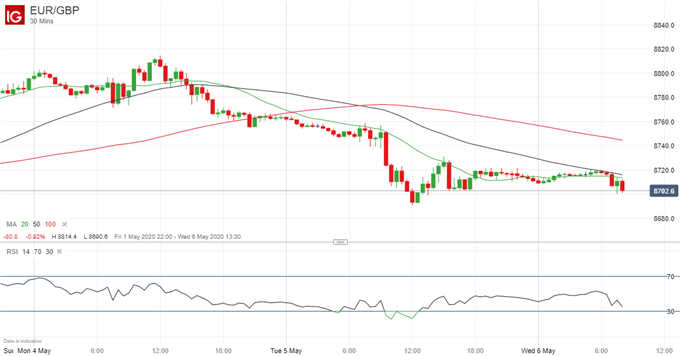 Recommended by Martin Essex, MSTA
Download our fresh forecast for GBP in Q2
Get My Guide

US-UK trade talks and a growing dispute between the US and China about the origin of the Covid-19 outbreak have also left EUR/GBP unscathed, with hopes that lockdowns will be eased offsetting concerns about the latest US-China spat.

Attention in the Sterling markets is now turning to the latest Bank of England decision on monetary policy, which has been brought forward to 0700 local time Thursday from the usual 1200. No change is expected in UK interest rates. DailyFX analyst Justin McQueen will be talking about the BoE’s decisions in a live webinar starting at 0645 London time Thursday. You can sign up here.