US Dollar Rises as ISM NMI Drops to 2009 Low

The Institute of Supply Management’s NMI survey for April crossed the wires at 41.8 Tuesday morning, beating expectations for 32. Despite the better than expected figure in the services sector, the April print represents a severe contraction in activity in the United States. US Dollar price action pushed higher following the harsh figure, which underscores the economic damage caused from the coronavirus pandemic and its resulting lockdowns across the United States.

Looking closer into the survey highlighted the economic damage inflicted on the services sector from stay-at-home orders across the United States for April. New orders dropped to 32.9 from 52.9, and business activity slipped to 26.0 from 48.0. The figures reflect the first contraction in the non-manufacturing sector since 2009, ending more than a decade of growth. 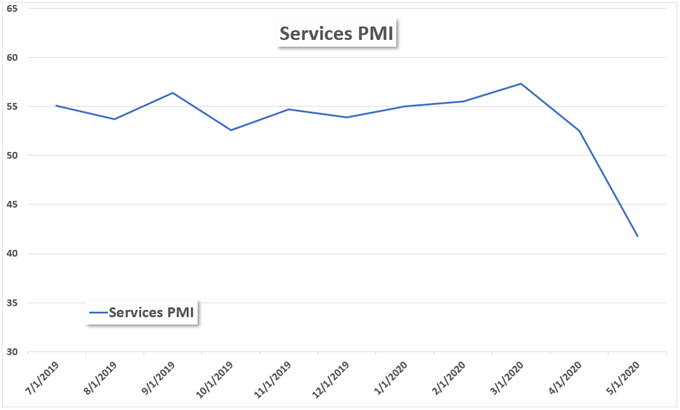 Despite the affirmation of the United States already being in a recession in light of severely distressed economic data, US markets continue to push higher, with the Dow Jones Index up over 300 points Tuesday morning. This comes after a solid month for US markets in April, as economies laid out plans to begin reopening. Market participants will now look towards Friday's non-farm payrolls report, where the US economy is expected to lose 701k jobs for the month of April. The NMI survey's employment index registered 30 percent for April, representing a sharp contraction of 17 percentage points from March.