ECB and the Euro price, news and analysis

The European Central Bank has expanded its measures to counter a slump in the Eurozone economy in the first quarter of this year caused by the spread of Covid-19. The ECB is introducing a new series of non-targeted pandemic emergency long-term refinancing operations (PELTROS) to support liquidity conditions in the Eurozone financial system and contribute to preserving the smooth functioning of the money markets by providing an effective liquidity backstop.

It will also reduce the interest rates on its third series of targeted longer-term refinancing operations (TLTRO III) but its bond buying will stay at €750 billion despite news earlier Thursday of contracting GDP across the region.

As expected, the ECB left its key interest rates unchanged, with its refinancing rate held at zero and its deposit rate at minus 0.5%. The DAX index of German stocks fell on the news while the yield on 10-year Italian government debt rose. However, the Euro held steady, with EUR/USD just under 1.09. 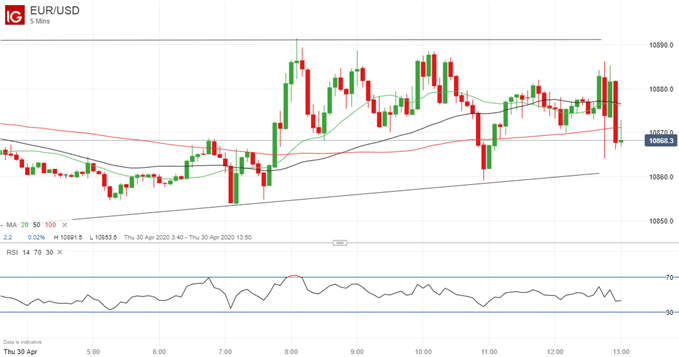 EUR/USD has been climbing gently since touching a recent low at 1.0727 on April 24. However, having climbed since then to a high just under 1.09, it would be no surprise if it now slipped back despite a general improvement in market sentiment on hopes for an antiviral drug to counter Covid-19 and a vaccine to protect against it.

The ECB has proved willing to inject money into the Eurozone economy in an attempt to prompt a recovery by absorbing surging sovereign debt. However, Eurozone governments have so far proved unable to agree meaningful joint action on fiscal policy to complement it despite ECB pressure on them to come up with a sizeable reconstruction plan.

This contrasts with the US, where President Donald Trump and Congress have already approved more than $4 trillion to support the medical response to Covid-19 and protect the economy from its impact – although Federal Reserve Chair Jerome Powell and others have called for even more.