The Australian Dollar rose a little on Wednesday as inflation in its home nation rose above expectations even though the prospect of higher interest rates remains a distant one at best thanks to the impact of coronavirus.

Official data showed the Consumer Price Index up by 0.3% on the quarter and 2.2% on the year. The annualized rise was well ahead of expectations, which had looked for a 1.9% rise, and also pushed price rises back into the Reserve Bank of Australia’s target band for the first time since the second quarter of 2018.

The ‘trimmed mean’ measure analogous to the ‘core’ inflation measures published elsewhere came in at 1.8% on the year, ahead of the 1.6% expected.

Still, the economic impact of the coronavirus has effectively cut the direct link between inflation data and interest rate policy across the world. It seems highly unlikely that interest rates will be rising soon anywhere, with the Reserve Bank of Australia on record as having said that current, record-low borrowing costs are likely to be in place for an extended period. Futures markets put the chance of a reduction in the Official Cash Rate to zero next month at 60%.

The RBA’s mandate is to keep consumer price inflation between 2% and 3% ‘on average, over time.’ In the generally disinflationary conditions prevailing since at least the Global Financial Crisis this has proven difficult for the Australian central bank, as it has for many others. The CPI rate has not been durably above 2% since the end of 2011.

It is possible of course that a sharp recovery once virus-lockdown periods end could see higher rates back in prospect sooner than markets now believe, but that case will have to be proven and long-elusive inflation will have to bed down at higher levels.

Still, AUD/USD got a little boost after the data, with bulls already feeling pretty good thanks to reported comments from Australian Prime Minister Scott Morrison suggesting that the easing of lockdown restrictions may not be too far away.

The Australian Dollar has shared fully in the bounce-back of all growth-correlated assets from their virus-inspired March lows. The currency has found support in the massive global stimulus programs designed to ameliorate the worst economic effects of the contagion and is now finding more in the prospect of gradual emergence from lockdown on many nations, its own included. 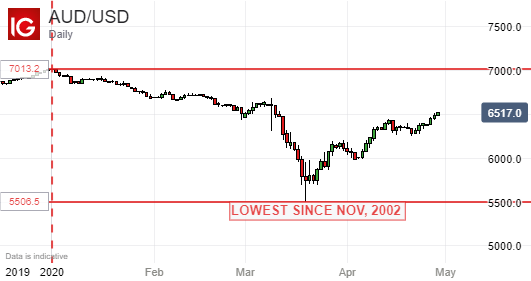 Moreover the virus’ effects on interest rate policy around the world have left the Australian Dollar looking more attractive than it did against currencies such as its US cousin which have also seen borrowing costs fall sharply.

Still, the currency seems likely to remain in the control of broader global risk appetite rather than overtly domestic concerns for the near future at least.