Japanese Yen Up, Nikkei 225 Down After BOJ Expands Policy Support

Financial markets were seemingly underwhelmed as the Bank of Japan attempted to boost stimulus efforts in the face of headwinds from the global Covid-19 outbreak. The Japanese Yen rose against an average of its major counterparts (white candles on the chart below) while its local benchmark for stocks – the Nikkei 225 index (turquoise candles) – traded lower.

BOJ Governor Haruhiko Kuroda and company expanded its lending facilities to more banks, scrapped limits on purchases of government bonds while increasing the size of planned commercial paper and corporate debt uptake to ¥20 trillion. Policymakers said they will not hesitate to take additional steps to ease credit conditions, if that is judged to be necessary.

These move came with a dramatic – albeit not entirely unexpected – downgrade of baseline economic projections. The FY2020 GDP forecast now calls for a decline of 3-5 percent. The outlook for inflation is not much more encouraging: core price growth excluding volatile items is seen in deflationary territory, registering between -0.3 and -0.7 percent on-year. 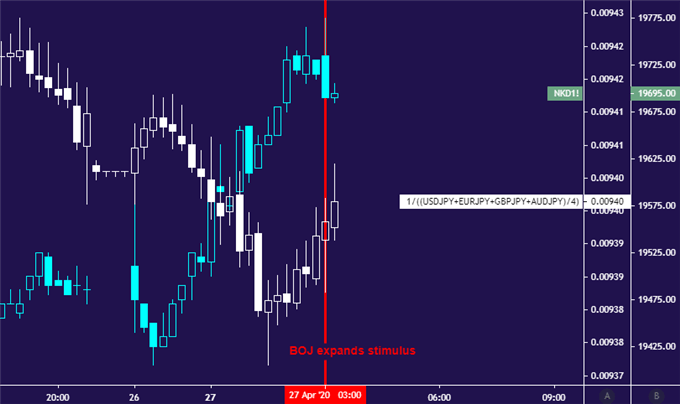 Recommended by Ilya Spivak
Building Confidence in Trading
Get My Guide

Looking ahead, the Nikkei remains confined in a narrow range below resistance clustered around the 2000 figure. That barrier seems to have emerged as the dividing line between recent gains – scored courtesy of the Fed’s firefighting efforts – the start of a larger rise or merely a correction before renewed liquidation.

A daily close above 20170 would argue in favor of the former scenario, exposing the 61.8% Fibonacci retracement as the next layer of immediate resistance. Alternatively, a push downward that forces a close below the 38.2% Fib at 18775 would also clear counter-trend support guiding the latest upswing, suggesting the downtrend is back in play. The next support thereafter seems to be at 17505. 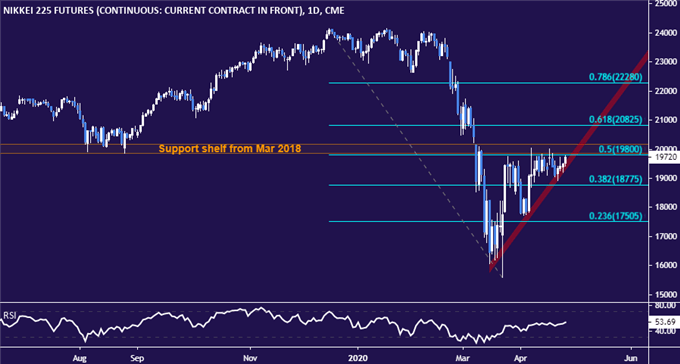 As for the Yen, it has struggled to find lasting direction over recent weeks. However, it is almost certainly telling that the anti-risk currency has not suffered substantial losses – as the similarly-minded US Dollar has, for example – amid the recent rebound in risk appetite. The dominant price trend continues to point higher too. On balance, this seems to hint at the markets’ preference for a risk-off scenario, at least for now. 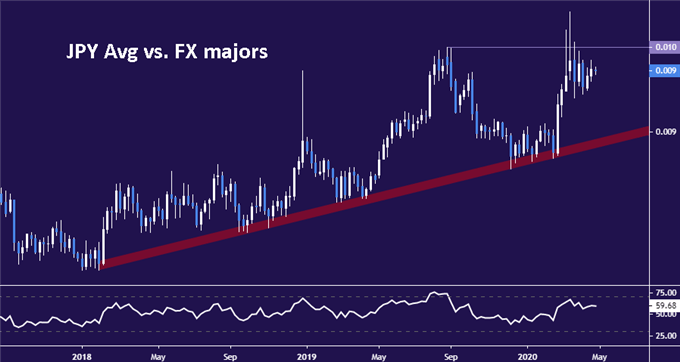