The Australian Dollar backtracked a little Friday on news that China’s economy shrank in the first quarter of this year, and by more than the markets had expected, as coronavirus exacted its toll.

Official Gross Domestic Product was down by 6.8% on the year, worse than the 6.5% expected and the 6% rate seen at the end of 2019. March industrial production was released at the same time. It slipped by a relatively modest 1.1%, much better than the 7.3% feared and hugely better than February’s 13.5$ collapse. Retail sales plunged, however, falling by 15.8% last month when a slide of only 10% had been expected.

Obviously overall contraction was expected, and it remains arguable that perhaps China’s economy is doing better than many in attempting to restart itself from virus-induced torpor. Initial 2020 growth forecasts will of course now need to be shredded, but China is hardly alone in that.

The Australian Dollar often acts as the foreign exchange market’s favourite liquid proxy bet on the Chinese economy. This is largely thanks to Australia’s vast raw-material export links to China. It seems to have played that role on Friday, wilting in the wake of the data. 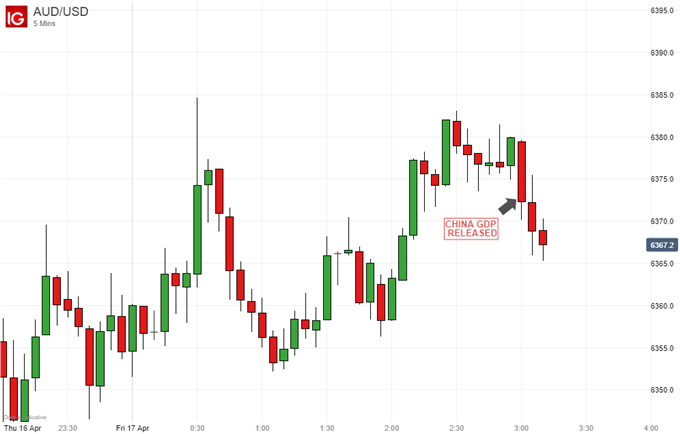 Still, the currency has bounced back remarkably from the lows to which it and other growth-correlated assets were pummelled in March by the realization of coronavirus’ likely impact. That strength has been rooted in the strong, co-ordinated fiscal and monetary responses to the crisis by countries, feeding hopes that a surge of liquidity will turbo-charge the recovery when it comes. 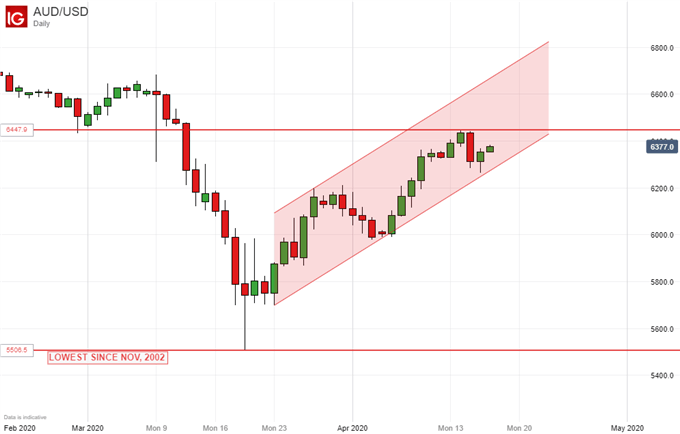 The Reserve Bank of Australia’s disinclination to push domestic interest rates to zero for the first time this month has probably helped too. However, none of this ‘good news’ alters the reality that most major economies remain in some sort of lockdown and that stimulus can’t really work while there’s so little economic activity to stimulate.

The Australian Dollar and other assets with similar risk profiles must remain vulnerable to any perception that economic shuttering will be a lengthier process than markets at first thought.