Despite yesterday’s ominous economic outlook from the IMF the S&P 500 had continued its uptrend, surging over 3%. However, we would like to add that the IMF’s stark warning is largely what market participants expect, given that equity markets saw its fastest bear market in history. In turn, focus in the near-term remains on the extent of the lockdowns across several countries, alongside the unprecedented economic stimulus. This has particularly been the case from the Federal Reserve where their balance sheet has ballooned by $1.7 trillion over the past month to total a record $6.13 trillion.

VIX Peak: In our weekly outlook, we highlighted that while risk assets had been finding comfort from the pullback volatility, the peak in the VIX does not necessarily correspond with a bottom in the market. This had been notably evident in the global financial crisis, as such, while the VIX can continue to head lower, so to can the risk assets.

Figure 1. VIX Peak Does Not Coincide with Market Bottom 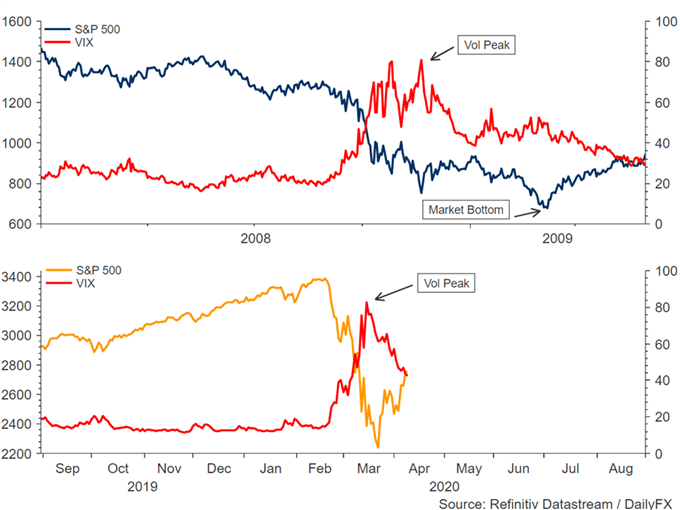 OPEC Disappointment: As present, risk assets have been under pressure throughout the session amid weakness in the energy complex. Oil prices have continued its slide with WTI crude dipping below $20/bbl and looking to test 2002 levels, despite OPEC’s historic production cut (down as much as 30% since last weeks high). However, given that the OPEC cut had been less than expectations, oil prices have remained weak, while IEA provided yet another reminder that the current production cut is not enough to offset the near-term demand losses. As such, a persistent move lower in oil prices would be expected to place additional pressure on equity markets.

Risk-barometer: As defensive stocks continue to outperform cyclical stocks (Figure 2)we raise doubts over the longevity of the rebound in the S&P 500 and thus see a short term reversal in the index. 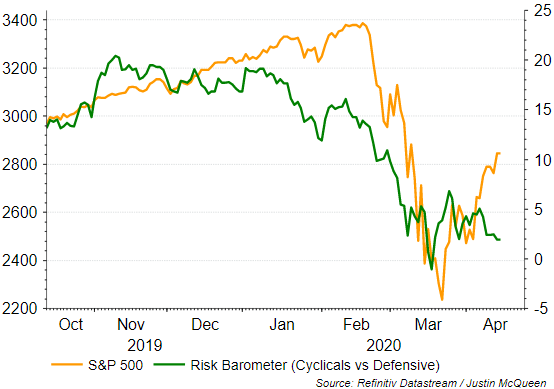 Having broken above 2800, which we previously touted as the inflection point. A period of consolidation above would be needed to raise scope for another leg higher with a closing break above 2890 needed for confirmation. However, given the weakness across the equity space, 2800 looks to be tested on the downside, which in turn leaves the index at risk of extending a move towards support at 2730. 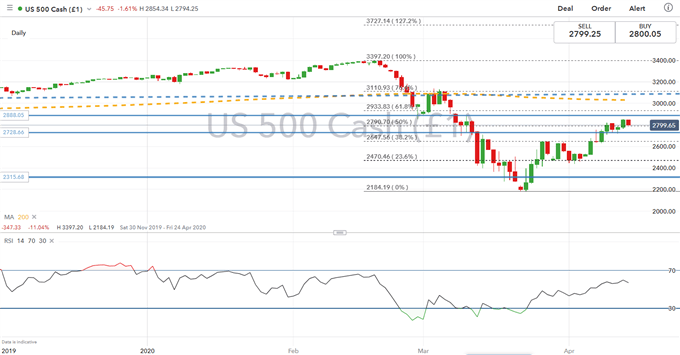