The Canadian Dollar participated in a broad-based rally against the US Dollar last week. Growing coronavirus optimism, driven by a deceleration in new COVID-19 cases, intensive care admissions and deaths, likely contributed to the protracted US Dollar pullback and 1.5% decline in USD/CAD last week.

USD/CAD price action now trades roughly 5% below its year-to-date high printed on March 19 – the strongest reading notched by the major currency pair since early 2016. The Canadian Dollar may surrender recent gains against its USD peer, however, as crude oil prices drop despite the OPEC+ deal. 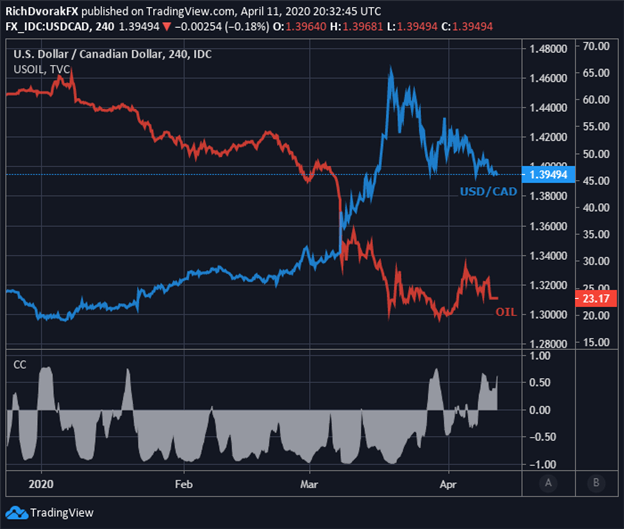 That said, the Canadian Dollar might face selling pressure once the CAD to oil correlation is restored to normalcy. Also, in light of prevailing crude oil demand woes, the announced OPEC+ supply cuts could fall short of bolstering crude oil prices. This poses considerable downside risk to the Canadian Dollar and might rekindle the rally in spot USD/CAD. 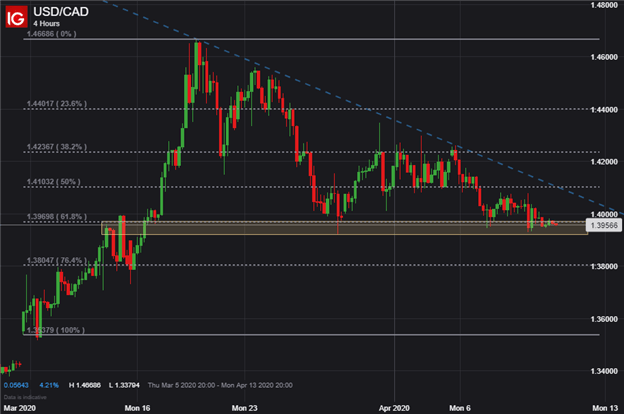 Meanwhile, the Canadian Dollar is pressing technical resistance as USD/CAD probes a major zone of confluence slightly below the 1.4000 handle. Highlighted approximately by the 61.8% Fibonacci retracement of its trading range since the early March gap higher, this technical level could serve as a springboard that sends spot USD/CAD price action recoiling back higher.

Reclaiming the 1.4000 mark could tee-up a test of trendline resistance extended through the series of lower highs recently recorded as USD/CAD consolidates. If the March 27 intraday low is breached, however, USD/CAD might gravitate toward the next support level around the 1.3800 price. 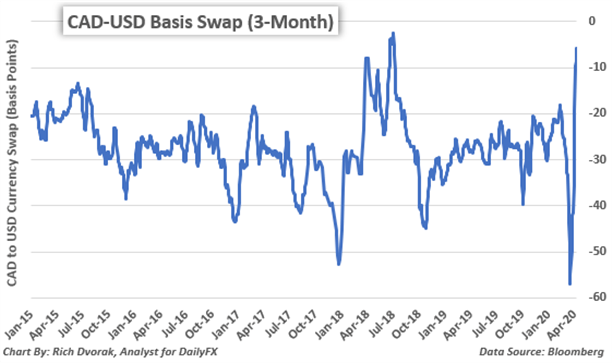 Perhaps improved US Dollar liquidity and reduced funding market stress – partly owed to a currency swap agreement between the Federal Reserve, Bank of Canada and other major central banks – has helped propel USD/CAD price action lower. Although, this theme might take the backseat as bearish fundamental forces weighing negatively on the Loonie, like the latest nosedive in Canadian employment data and in crude oil prices, take focus again.

On another note, the Bank of Canada is scheduled to provide traders with another monetary policy update on Wednesday, April 15 at 14:00 GMT. The Bank of Canada might strike a gloomy tone toward the economy by underscoring the headwinds it faces due to the collapse in crude oil prices and the global recession that is likely unavoidable. In turn, spot USD/CAD might resume its surge while the Canadian Dollar comes back under pressure.