QE in South Africa: On Wednesday, the South African Reserve Bank (SARB) stated that it would purchase an unspecified amount of government bonds in the secondary market, in order to improve functioning via liquidity. The importance of this announcement is the fact that South Africa is a high yielder, given that they have interest rates set at 5.25%, potentially setting a precedent for other high yielders in the EM space.

Although, given the fact that South Africa’s budget deficit had been expected to rise to a 3-decade high of 6.8% prior to the coronavirus outbreak, the SARB arguably had little choice but to announce a QE program, particularly with bond yields in South Africa rising sharply as risk sentiment deteriorated.

Foreign Investors Exit SA: Alongside this, foreign investors had been significantly reducing their exposure to South Africa amid persistent selling in South African debt with a record outflow of ZAR 12.8bln at the beginning of the month. However, having announced their QE program, foreign investors have posted its largest net purchase of SA debt in over a month. That said, we still see risks as skewed to the upside for USD/ZAR, particularly as risk appetite sours.

Figure 1: Foreign Investors Had Been Fleeing from South Africa Prior to QE Announcement 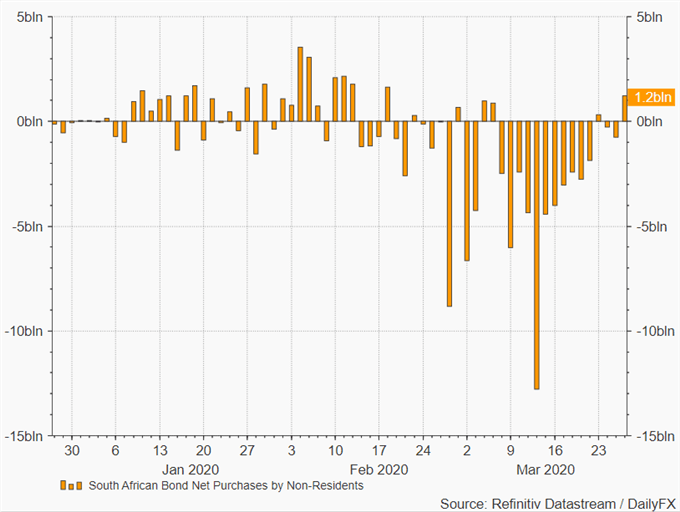 Moody’s Rating: A domestic risk for the South African Rand is that Moody’s are due to announce their latest decision on South Africa’s sovereign rating. As a reminder, Moody’s are the only rating agency to have South Africa’s sovereign rating above junk status. As such, while the risk of a downgrade to South Africa’s debt is high, particularly given the current economic backdrop. Like they did at the back end of last year, the rating agency may take a wait and see approach, potentially providing some short-term relief to the ZAR. Alongside this, foreign investors have significantly reduced their exposure to South Africa and thus a decision to downgrade may not prompt a sharp depreciation in the currency.

Nonetheless, with the economic backdrop deteriorating sharply, USD/ZAR may continue to make new ground with a test of the 18.00 handle. Breaking above previous 2016 high of 17.97. On the downside, USD/ZAR remains supported above 16.44, which marks the 76.4% Fibonacci retracement. 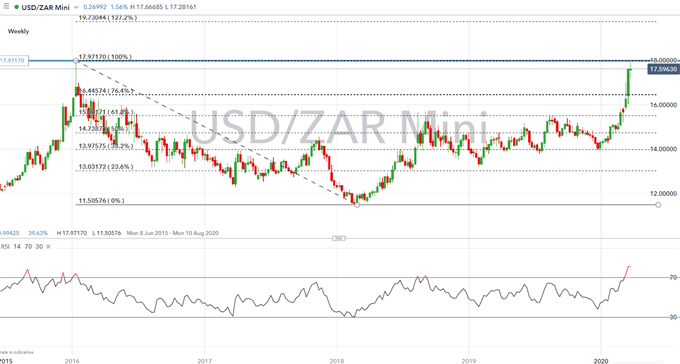