US jobless claims hit historic levels Thursday morning as Covid-19 takes its toll on the US economy. For the week ending March 21st, initial jobless claims crossed the wires at 3.2 million, up sharply from the week before at 281k. The US Dollar, which has recently pulled back from three-year highs on strength from the global pandemic, saw a bounce as the figure crossed the wires. Continuing claims also pointed to trouble with 1.8 million, rising from the previous week of 1.7 million. 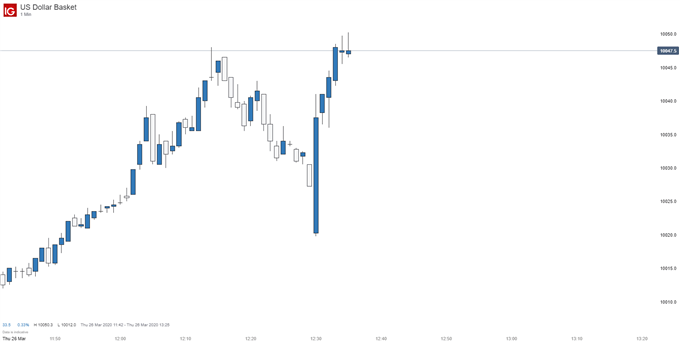 The staggering figure in initial jobless claims this morning is one of the first economic data points that highlights the capriciousness in economic decline due to covid-19. However, these numbers are unlikely to affect next week’s jobs report due out on Friday, with the cutoff for the household survey ending on March 14th. Still, the sharp rise in initial claims is likely to put an even gloomier tone on expectations for economic data in the coming weeks. 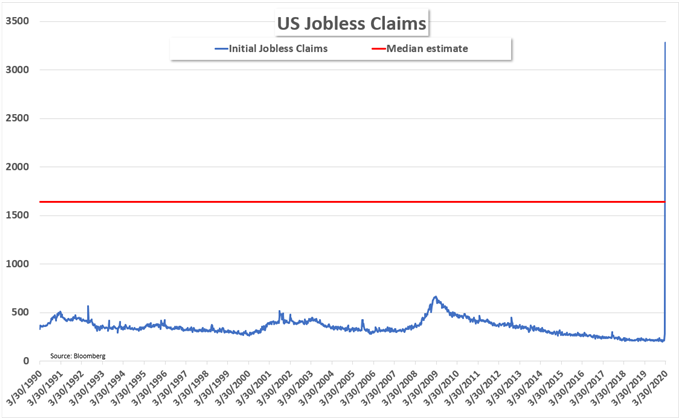 Recommended by Thomas Westwater
Building Confidence in Trading
Get My Guide

Policy makers have been scrambling to combat the economic fallout anticipated from covid-19, which now sees the United States with over 69 thousand confirmed cases and over 1,000 deaths. Policy makers on Capitol hill passed a $2 trillion stimulus package Wednesday night, which now heads to the House for approval before going to the President.