OPEC+ members failed to reach an agreement over cutting production after two days of talks in Vienna. The meeting aimed for production cuts of 1.5 million barrels per day to the end of the year to bolster oil prices. Crude oil is now over 20 percent lower from February highs. Already under pressure, crude oil continued to sink as news crossed the wires casting doubt on an agreement. Shortly after delegates from OPEC said that members did fail to reach an agreement, sending crude and brent oil prices to new session lows. 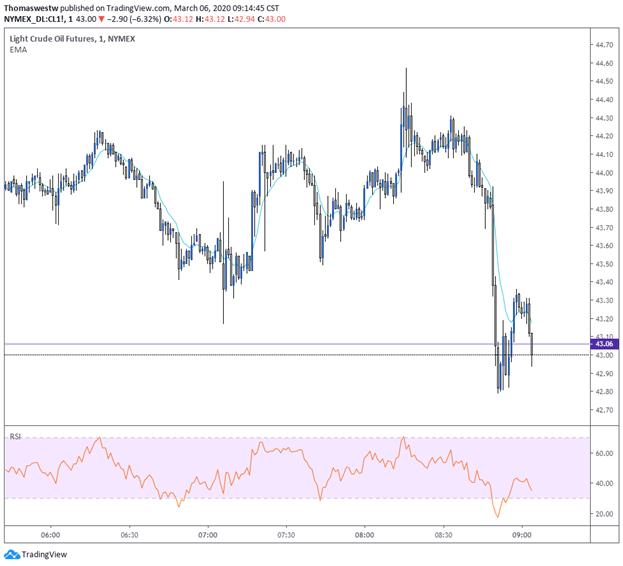 Chart created in TradingView by @FxWestwater

Talks earlier in the week hit a road bump as Russia’s Minister of Oil resisted deeper cuts going forward, noting that it was still too early to take serious action. Russia is more accepting of lower oil prices due to their belief that it could possibly kill the US Shale market and therefore bolster Russia’s position as an oil exporter in the future. 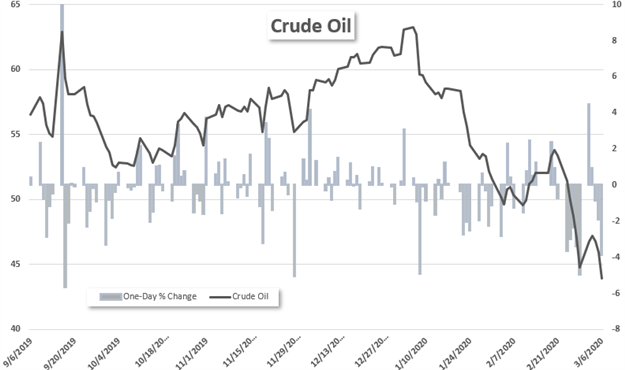 However, the deep reduction in oil prices since the coronavirus hit market prices has undoubtedly put pressure on OPEC members who generally rely heavily on revenue from their exports of oil. Prices are likely to remain suppressed until the virus sees significant containment. Like OPEC, central banks and fiscal policy makers also see the need for action to combat the affects of the virus on markets, but volatility and sinking prices continue across equities, commodities, and bond yields despite efforts.