The Australian Dollar gained Wednesday as official growth data topped forecasts for the final quarter of the old year, even though the subsequent coronavirus outbreak has rendered the numbers more historic than usual.

The data underline expectations that the Australian economy continues to pick up pace, but of course the effects of coronavirus are likely to mean that this year’s first quarter will see the economy struggle. That probably accounts for the comparatively muted response in AUD/USD. The Australian Dollar certainly rose, but it’s highly likely that it would have surged by a lot more had not the coronavirus story come to dominate market sentiment. 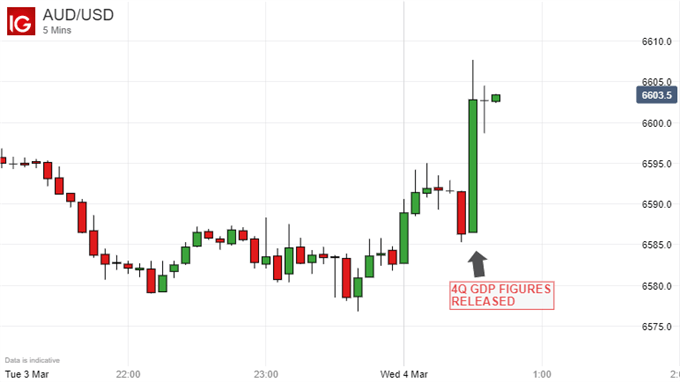 Still, investors will remain hopeful that the Australian economy can regain its upward trajectory once the contagion has passed, although they will note that government spending accounted for much of the growth seen last year.

More broadly the Australian Dollar has bounced from near eleven-year lows against its US rival as the prospect of co-ordinated global monetary policy easing to counter the effects of coronavirus supports all such growth-correlated assets. 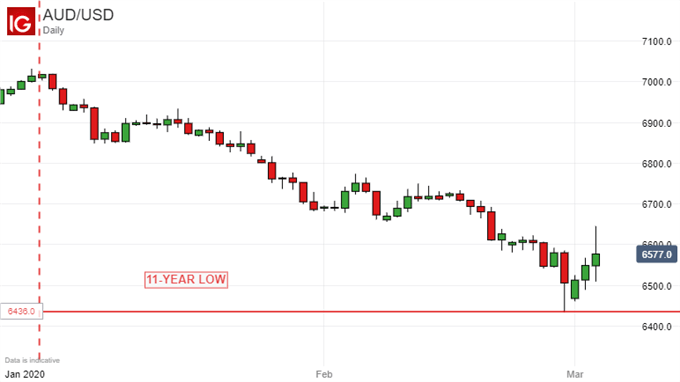 The currency got a counterintuitive boost on Tuesday when its own central bank cut its base rate to a new record low of 0.5%, There were more gains in Australia’s Wednesday when the US Federal Reserve lopped a half percentage point from US borrowing costs.

Right now financial markets seem in the mood to cheer this remedial action but central banks around the world have voiced their own doubts about the likely effect of further policy easing at a time when years of ultra-low interest rates have in many cases already seen consumers highly leveraged.

The Australian Dollar remains very close to those eleven-year lows and it seems quite unlikely that it will catch a lasting bid for as long as the virus continues to exact its heavy toll on China’s economy- Australia’s key export partner.