US Dollar, USD/MYR May Rise After Bank of Malaysia on Epidemic Woes

The US Dollar could see strength against the Malaysian Ringgit in the near-term. USD/MYR is eyeing the upcoming Bank of Malaysia interest rate announcement due at 7:00 GMT. A 25-basis point reduction in the overnight policy rate is expected from 2.75% to 2.50%. That would mark back-to-back easing efforts so far this year. Since 2020 began, USD/MYR has thus climbed an impressive 3.81%.

The timing of monetary easing is of utmost importance with the ongoing coronavirus outbreak threatening to hurt global growth prospects. Over the weekend, China saw gauges of manufacturing activity shrink by the most on record and surpassing lows after the 2008 financial crisis. Malaysia has an important trading relationship with the world’s second-largest economy, implying downside knock-on effects.

At the same time, the nation is experiencing some political uncertainty after Mahathir Mohamad’s sudden resignation. That temporarily threw fiscal stimulus bets into doubt, though the former Prime Minister still delivered his fiscal stimulus plan. This amounts to about MYR20b to boost economic growth after Muhyiddin Yassin was sworn in as the new prime minister over the weekend.

He comes into power amid deteriorating local economic conditions. The latest figures saw GDP rise by the weakest since 2009. On the chart below, the FTSE Bursa Malaysia KLCI Index is down over 22% since April 2018. This means it has effectively surpassed bear-market territory. Though at this point, key rising support from the 1997 Asia Financial Crisis is maintaining the long-term upward bias. 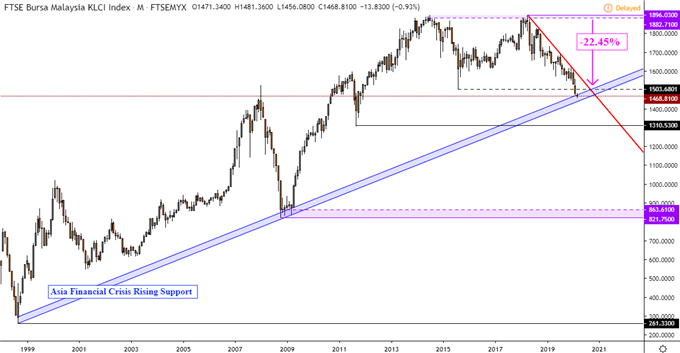 With that in mind, the near-term upside risk from a sentiment standpoint for USD/MYR is a resumption of the selloff in global equities. This follows the worst week on Wall Street since 2008. The markets are increasingly pricing in prospects of a global coordinated move in monetary easing with fiscal stimulus. Yet, a draft of Tuesday’s G-7 summit somewhat downplays these hopes.

Keep a close eye on the MSCI Emerging Markets Index (EEM), which tends to inversely follow USD/MYR. If the markets are too exuberantly pricing in global stimulus prospects, that may plunge the EEM, perhaps boosting USD/MYR. The medium-term risk from the market mood point is the limits of monetary policy given that most major central banks were unable to successfully unwind easing efforts over the past decade.

The USD/MYR dominant uptrend is being maintained by rising support from January. In February, prices closed above falling resistance from August, shifting the medium-term outlook bullish. Since then, prices struggled to confirm a break above highs from 2019 which if taken out, may prolong the USD/MYR uptrend. Otherwise, a turn lower places the focus on 4.1850 followed by 4.1630 on the daily chart below. 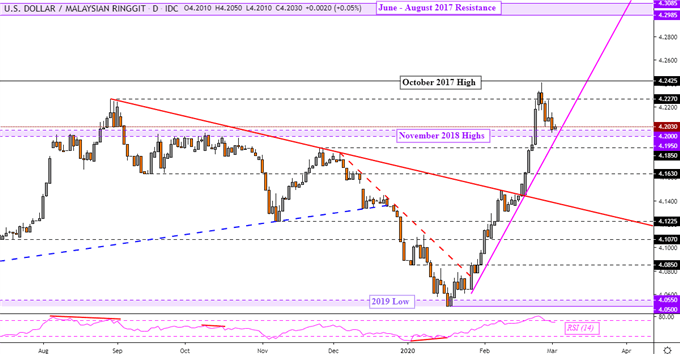