G7 Finance Ministers and Central Bankers are planning a call to discuss the coronavirus, which will take place from 1200GMT. Overnight, Reuters sources reports noted that a draft G7 statement did not contain specific language calling for fresh fiscal stimulus nor coordinated rate cuts, which as it stands, has done little to curtail the rebound seen across global equity markets. That said, the reversal in risk sentiment has largely been predicated on the aggressive money market pricing for central bank action. Of note, markets are pricing in 65bps worth of easing by the March 18th meeting. As such, in action from central banks may markets somewhat disappointment and thus place equities once again on the backfoot. (Potential for coordinated G7 action for the first time since 2011)

DAX: Much like the rest of the equity space, the DAX saw a sharp rebound in yesterday’s session with gains persisting throughout today’s session amid raised expectations of coordinated central bank action. That said, with the DAX above the psychological 12000 level, the index is edging towards the 38.2% fib situated at 12433. However, in the longer term, given the weakness in China, which had been highlighted by the record low Chinese PMI report, there is the potential for greater negative shocks to the European markets amid its exposure to China, alongside the persistent weak data out of the Eurozone. 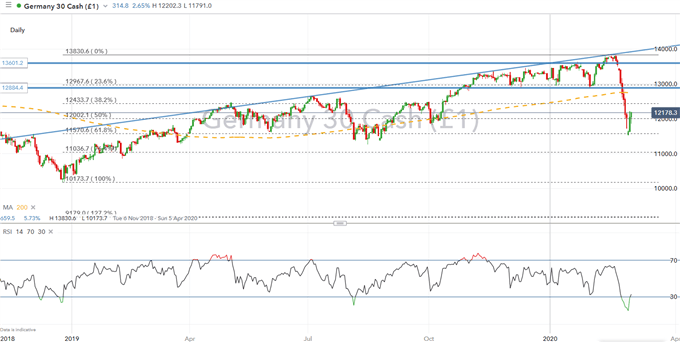 FTSE 100: The FTSE 100 continues to recover from last weeks aggressive sell-off. Alongside this, with tense start to EU and UK trade negotiations, UK assets will become increasingly focused on Brexit talks yet again. As such, with the Pound continuing to hold below the 1.2800 handle, a persistent move lower in the currency as Brexit uncertainty begins to creep in, may see the FTSE 100 hold onto to its recent reversal. As the index breaks above resistance at 6792, a close above could put the index on course for a test towards 7000.