The Australian Dollar edged up Tuesday after the Reserve Bank of Australia cut borrowing costs to yet another record low in response to the ravages of the coronavirus.

The Official Cash Rate now stands at 0.50%. The currency’s gains are perhaps surprising at first glance, as lower interest rate usually deter buyers. However, the broad foreign exchange market clearly senses here the initial stages of a broad, co-ordinated monetary response to the disease, an remains hopeful that this will offer support to risk-correlated assets such as the Aussie. 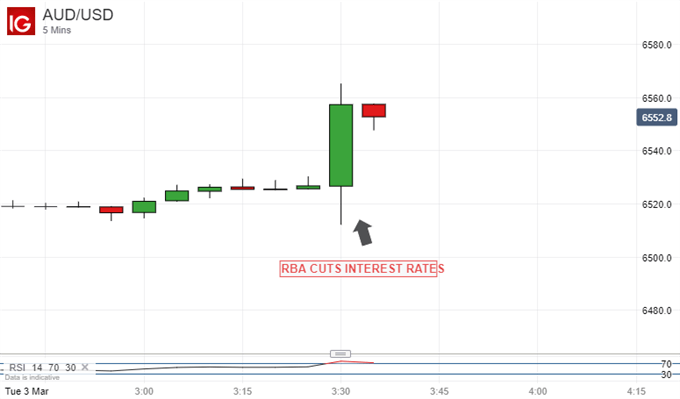 The RBA said that it was yet too early to assess the virus’ full impact, but that growth in the current calendar quarter was likely to be significantly weaker as a result. It also said that once the virus is contained the Australian economy’s ‘improving trend’ could be expected to continue.

Before the fact markets had moved swiftly to price in just such a move in response to the obvious economic drag caused by the spread of coronavirus. As late as last week futures markets had suspected that the RBA might stand pat. However, news that Chinese manufacturing output collapsed in February saw a rapid change in expectations.

China is of course the destination for vast quantities of Australian raw-material exports and, although weaker Chinese demand is far from the only way in which the contagion could hurt Australia, it is one that the RBA is notably concerned about.

Futures markets believe that the OCR may yet go lower, and this complete lack of monetary-policy support is likely to weigh on the Aussie, at least until other central banks show their colors. The RBA has been an early actor in the monetary fight against coronavirus but it won’t be the only one. 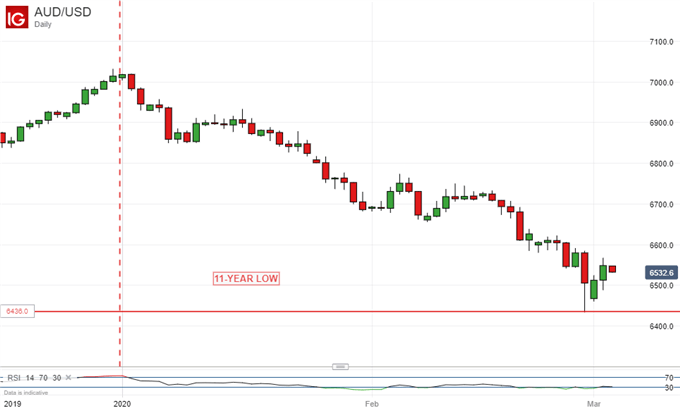 AUD/USD has seen a modest bounce on its daily chart in the last couple of days. However, as perhaps the currency markets’ pre-eminent growth correlated bet, the currency will probably remain vulnerable and in the bears’ sights for as long as virus-related risk plays dominate financial markets.

Its’ important to remember though, that the currency has already taken a considerable hit this year. While the markets can look to global monetary easing it may take a significant worsening of the virus’ effects to push the currency much further down.