The Singapore Dollar barely moved Wednesday despite an astonishing snap-back in its home nation’s industrial production from the doldrums of late 2019.

January’s on-month rise came in at a scarcely credible 18.2%, with the annualized gain standing at 3.4%.

Both figures blew estimates away. However, December’s 0.7% fall was revised lower, to 3.7%, and November’s 8.9% collapse stands, so this latest rise is actually more modest than it might appear.

In any case, the pharmaceutical sector was behind much of the overall vigor, with its output rising 59.4%.

The Singapore Dollar’s lack of reaction is understandable as the currency does tend to move at least as much in step with global risk trends over time as it does in response to local data. It may also suggest that the markets still see much trouble ahead for the country, as coronavirus spreads, with pharma’s pep perhaps only underlining these worries. 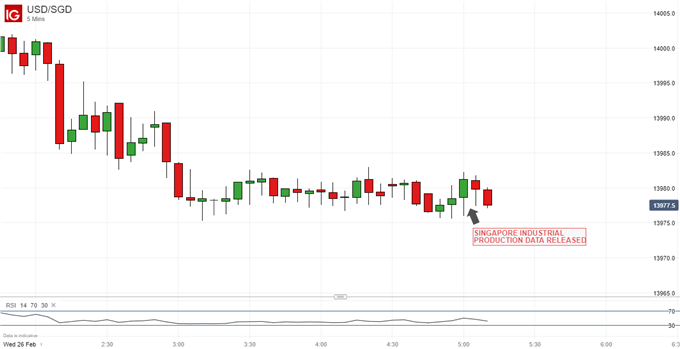 Singapore is extremely vulnerable to the contagion’s economic impact thanks to its position as a global shipping and finance hub, in addition to the strong links between China and the majority population of Singapore. The government has quarantined many citizens who traveled to China over the new year period, and revoked the visas of Chinese citizens in the country. 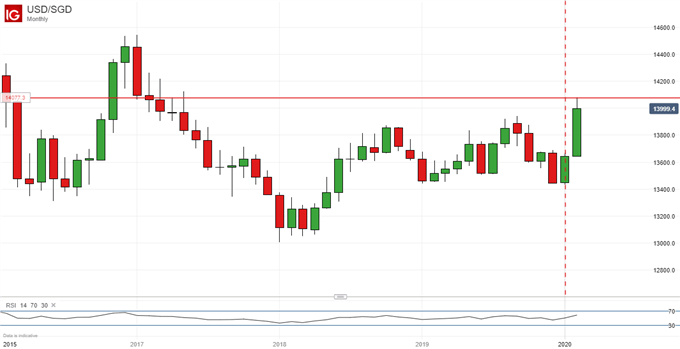 The Singapore Dollar has weakened quite sharply in 2020, with USD/SGD very close to three- year highs. As a major hub for global trade the city state is perhaps especially vulnerable economically to the virus’ spread, which is expected to weigh on commercial capital flows.

The Monetary Authority of Singapore manages policy via exchange rate control rather than the interest rate policy used elsewhere. It said earlier this month that there was room to loosen policy, noting a weakening of economic conditions following the viral outbreak, sending USD/SGD sharply higher.

The Singapore Dollar is one of many growth-correlated currencies in the Asia Pacific region and beyond which seem unlikely to stage a meaningful recovery for as long as coronavirus dominates the headlines.