The Australian Dollar lost a little ground Thursday as the unemployment rate ticked up in an official labor market report that was far from wholly gloomy.

January’s rate was 5.3%, a four-month high and a reversal of the declining trend seen since October 2019.

However, full time employment grew by an impressive 46,200, while part time jobs were down by 32,700 for an overall jobs gain of 13,500. That was ahead of market expectations, which looked for a 10,000 rise, and the overall participation rate was up as well. However, that rise in the overall unemployment rate is likely to weigh on thinking at the Reserve Bank of Australia. It hopes to see a decline to 4.5% over the next two years, and any sign that thinks are going the other way will inevitably mean the market sees lower interest rates and for longer.

This was reflected in AUD/USD’s immediate reaction, although the market clearly became a little more sanguine once the report’s details had been reviewed. 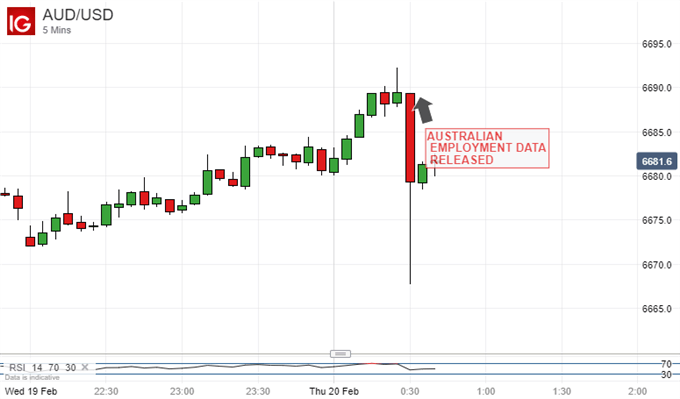 The previous month’s data saw a big surge in job creation but all of it was accounted for by part-time rolls. Full time employment slipped, robbing the strong headline figure of some impact. January’s data are almost a mirror image.

The Reserve Bank of Australia is watching this series very closely, hoping that a tighter labor market will lead to stronger wage growth and consumption. This is a key missing part of the inflation mosaic and a primary reason why prices remain relatively subdued.

As a primary growth-correlated currency, the Australian Dollar has been hard hit this young new year by the general withdrawal from risk that has accompanied the spread of Wuhan-strain coronavirus out of China. 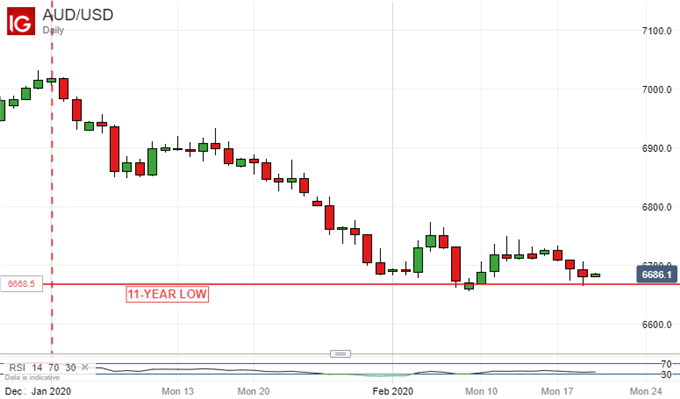 Australia faces economic drag via many channels, the most notable being its status as raw material supplier of choice to the Chinese economy. So far however the RBA has not taken any additional monetary policy action to try and shield Australia from this economic shock. It believes that rate cuts already made are sufficient at this point and is quite sanguine about the likely duration of the virus’ economic effects.

The market still reckons that record low Australian interest rates will slide a further quarter percentage point though, probably in this year’s first half.