The Australian Dollar got little more than a passing knock Tuesday as minutes from the Reserve Bank of Australia’s last monetary policy meeting flagged up concerns about coronavirus impact and reiterated that low interest rates will probably be required for an extended period.

The Official Cash Rate was kept at its 0.75% record low after the meeting which took place on February 4. This was the expected outcome although the market had priced in a substantial chance of further easing until days before the event.

The minutes said that coronavirus presented a ‘material risk’ to China’s economy and therefore to Australia’s but that it was too early to judge its impact. The RBA said it was prepared to ease policy further if needed but that the impact of such a move needed to be balanced against the effect of still-lower returns on savers.

Consumption remained a key uncertainty for the central bank, with labour market developments flagged again as a key metric. The catastrophic bushfires which have plagued Australia were expected to be an economic drag through the current quarter, with recovery expected in full by year end.

AUD/USD drifted lower after the minutes’ release, but there was really nothing new here for investors who will now await more hard data. Asia Pacfic markets had already stumbled on Tuesday after Apple said it that coronavirus posed a revenue risk. 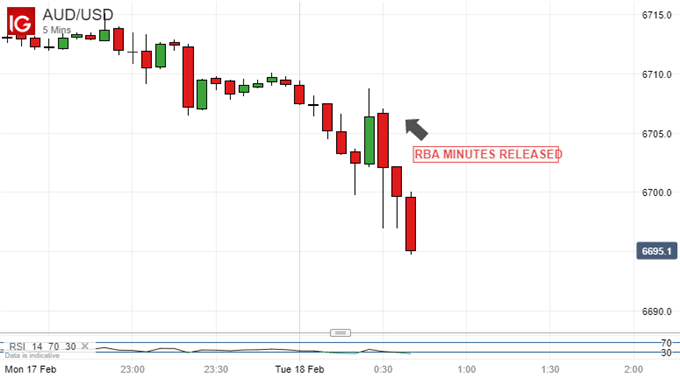 As perhaps the pre-eminent growth-correlated currency the Australian Dollar has taken a beating this year as the coronavirus’ spread has sparked worries about a fresh headwind to global economic progress.

However, AUD/USD has been more settled through February on hopes that the contagion won’t offer the sort of economic hit seen in the recent past with outbreaks such as 2003’s Severe Acute Respiratory Syndrome (SARS), and that disruption will prove fleeting, a hope backed up by RBA commentary.

Domestically the perception that the bar to more than one more quarter-point interest rate cut is extremely high, and that the bar to further action such as Quantitative Easing higher still, has offered the Aussie further support.

Market focus will now turn to official Australian labor market data for January due for release on Thursday. This series has held up extremely well in terms of headline job creation, but December’s impressive rise masked the uncomfortable fact that full-time positions fell.

The market is looking for a headline gain of 10,000 jobs, on average, but expect close attention to be paid to the full-time/part-time split this time around. Another stalled month for the former could well take the shine from any market response.