Currency volatility in the Pound Sterling is set to spike over the next 24-hours with the release of 4Q-2019 UK GDP data expected February 11 at 9:30 GMT.

Owing largely to sustained Brexit uncertainty, which has weighed negatively on business investment and the broader British economy, UK GDP growth is expected to slow to a negligible 0.8% year-over-year rate. 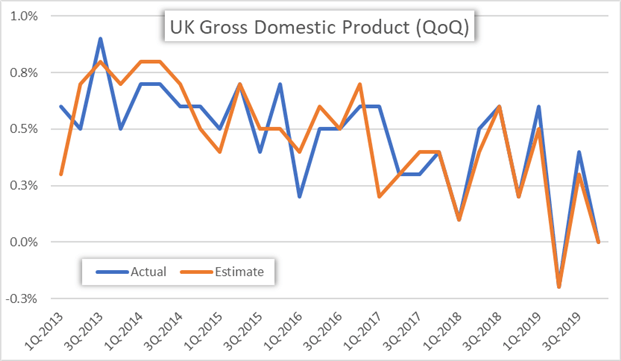 A return to positive growth in 3Q-2019 after contracting on a quarter-over-quarter basis in 2Q helped the UK narrowly escape slipping into a technical recession, but downside risks to UK economic outlook still linger.

As such, the British Pound may be in jeopardy of reversing its string of gains recorded that stemmed from the influx of Brexit deal optimism late last year. 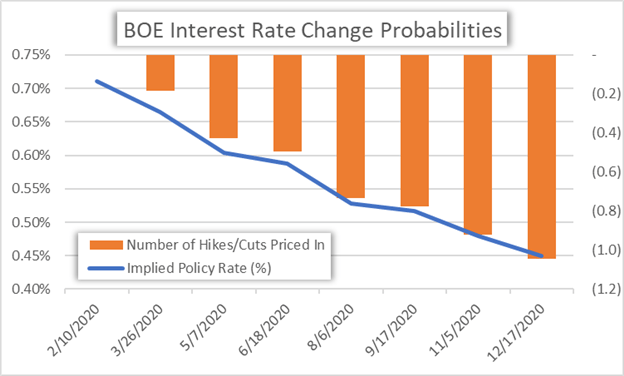 A clear path to Brexit was not provided to until the December 12 General Election results were revealed and thus raises the probability that UK business activity remained under pressure.

A shocking miss on 4Q-2019 UK GDP could correspondingly prompt the Bank of England (BOE) to join other dovish central banks that flooded markets with accommodative policy last year.

This is considering language found in the BOE monetary policy report published last month, which noted that “if growth stays weak, then we may need to lower interest rates to support the UK economy and ensure that we return inflation to our 2% target sustainably.” 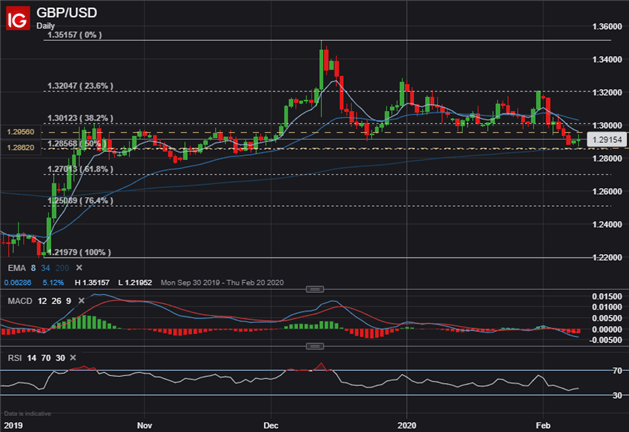 Nevertheless, spot GBP/USD is estimated to fluctuate between 1.2862-1.2956 over the next 24-hours with a 68% statistical probability judging by its overnight implied volatility reading of 7.0%.

These technical barriers of support and resistance are underpinned by GBP/USD’s 200-day and 8-day exponential moving averages respectively, which will look to keep moves in the Pound Sterling roughly contained. 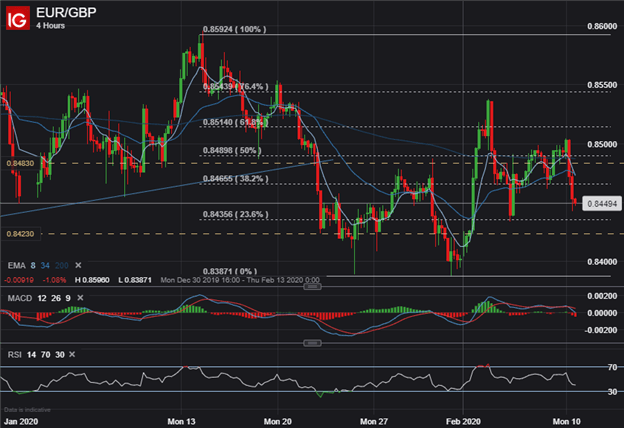 Similarly, spot EUR/GBP price action is anticipated to fluctuate within a 60-pip band between 0.8423-0.8483 with a 68% statistical probability. This options-implied trading range is calculated using EUR/GBP’s latest overnight implied volatility reading of 6.8%. 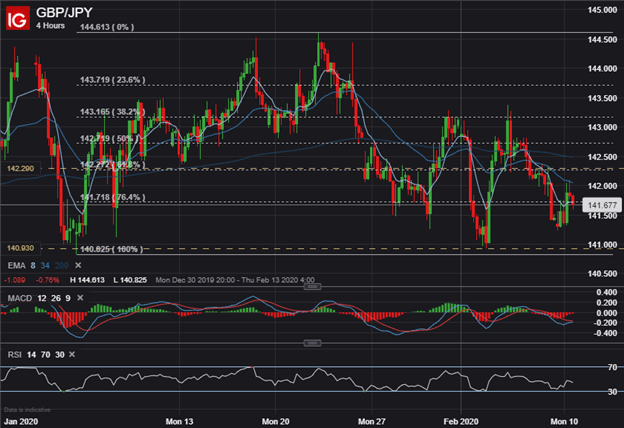 GBP/JPY is expected to be the most active British Pound currency pair in the wake of Tuesday’s UK GDP report release judging by its overnight implied volatility reading of 9.2%. On that note, spot GBP/JPY is estimated to gyrate between 140.93-142.29 with a 68% statistical probability. 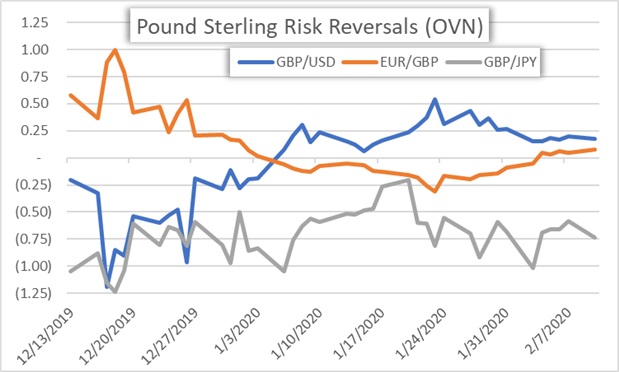 The positive risk reversal of 0.18 for GBP/USD hints that the cable could rise from current levels, though the figure has slid markedly from its recent high of 0.54 on January 23 and suggests waning upside prospects.

At the same time, the overnight risk reversal for EUR/GBP just turned positive and implies that forex options traders expect the British Pound to fall against the Euro on balance.

The overnight GBP/JPY risk reversal has remained in negative territory for quite some time but continue to edge lower. This indicates an increasingly bearish bias toward the Pound Sterling relative to the Japanese Yen.