The Australian Dollar market was focused like all others on coronavirus headlines Monday and didn’t have much attention to spare for Chinese inflation numbers even though they did print a new highest point since late 2011.

The official Consumer Price Index for January rose by 5.4% compared to the same month last year. That was well above both the 4.9% markets had expected and January’s 4.5% result. The fastest acceleration since October 2011 was mainly down to the skyrocketing price of food. Prices in that sector rose by 20.6%, with non-food adding only 1.6% to the mix. China’s staple meat, pork, has seen prices soar thanks to outbreaks of swine flu in the country.

Factory gate prices fell by 0.5% on the year, matching the previous month’s declines and disappointing market watchers who had hoped for a flat outcome.

The Australian Dollar can act as a China-economy proxy given its home economy’s strong trade links to the world’s number two economy. It did not do so very obviously after these data although the tentative rise seen through the Asia-Pacific morning went on after them.

All Chinese data will now be parsed for likely coronavirus effects. However, the worry that the virus will simply add to what were already considerable economic headwinds is unlikely to be dispelled by these numbers or indeed by any likely to come soon. 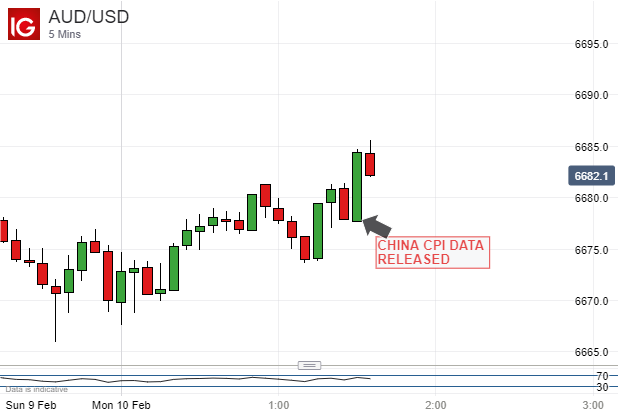 The Australian Dollar is back to last year’s eleven-year lows on its daily chart. As perhaps the preeminent growth correlated currency the Aussie has been hit especially hard by the spread of coronavirus and the fears over economic growth it has spawned. 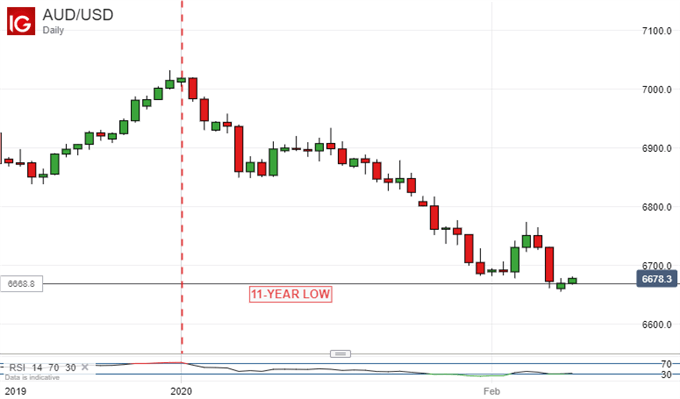 The Reserve Bank of Australia left interest rates on hold last week. This had been expected but the fact of it gave the currency some momentary support. Futures markets still think that record low Australian interest rates will go lower than their current 0.75% rate, probably in April.

The Australian economy is showing some signs of acceleration with employment growth and inflation both heading in the direction the RBA would prefer. However, the market was already wondering whether this upbeat story could hold good for much longer, we are after all quite late in this cycle. The coronavirus has added another major doubt and it’s very hard to see the currency making meaningful gains while it dominates the headlines.