The Australian Dollar as the Reserve Bank of Australia did as expected and kept its Official Cash Rate on hold at the record low of 0.75% in place since October 2019. 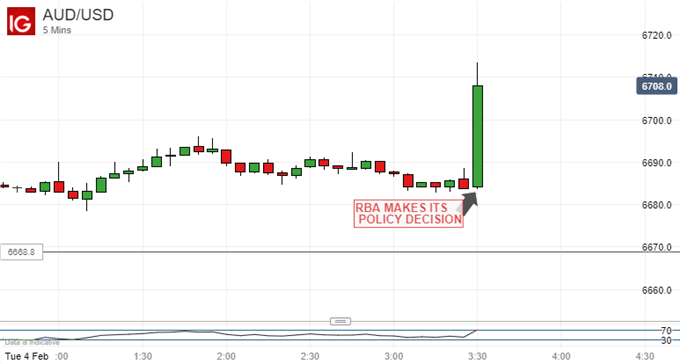 The chances of a move at this meeting had been dramatically cut by futures markets through January. The Australian economy has thrown out some fairly strong data in the last couple of weeks, with inflation rising for a fourth straight quarter and job creation strong.

However, those headline figures may well allow the RBA to continue with its view that gradual recovery is in train without the need for much further stimulus. That said, futures markets still think rates are going lower again, probably in April.

The central bank stuck to standard fare in its statement, standing ready to ease policy if needed and expecting growth of 2.75% this year, 3% next. It sees inflation ‘close to 2%’ this year and in 2021.

The Australian Dollar has been hit hard by the general retreat from growth correlated assets which has accompanied headlines around the spread of coronavirus out of China. AUD/USD has fallen hard and fast this year, and is now flirting once more with eleven-year lows. 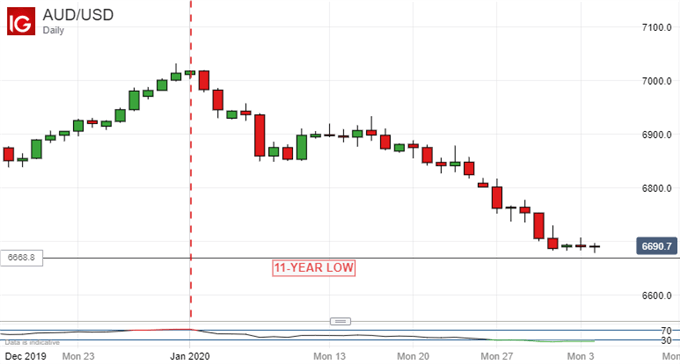 It is possible that sentiment has weakened for reasons beyond the coronavirus, and that optimism had got out of hand toward the end of 2019. While the US and China have signed an interim trade deal, it’s no more than a tariff truce. A lasting settlement could yet be years away. The UK’s general election may have moved the Brexit story on after years of political gridlock, but a no-deal exit from the European Union remains possible.

The Aussie benefited from rising hopes on both counts and may now be suffering as reality bites. Indeed the RBA Tuesday cited US-China trade worries as well as coronavirus as sources of uncertainty for global growth.

While unlikely to explicitly welcome this development, the RBA may not be altogether hostile to it. A weaker currency is one of the best ways to import inflation. A central bank with an inflation mandate that it can’t hit can ill afford to be too fussy about how pricing power is generated, after all.

In any case, immediate market focus will now turn to RBA Governor Philip Lowe. He has been quiet in public so far this year but will speak in Sydney on Wednesday and give semi-annual testimony to parliament on February 7.