Stocks floundered on Tuesday as Boeing shares were halted after the company announced further delays to the 737 Max program. Originally scheduled to return to service in early 2020, the Chicago-based airline manufacturer revealed the model will not return to service until June or July 2020. In response, Boeing shares tumbled 5% and dragged the Dow Jones lower.

Plunging beneath support at the $320 mark, Boeing has extended its underperformance amid the Max crisis. Consequently, Apple has become the highest weighted component of the Dow Jones Industrial Average, a title long held by Boeing. The shift lends more influence to the technology industry, specifically Apple.

Changing of the Guard 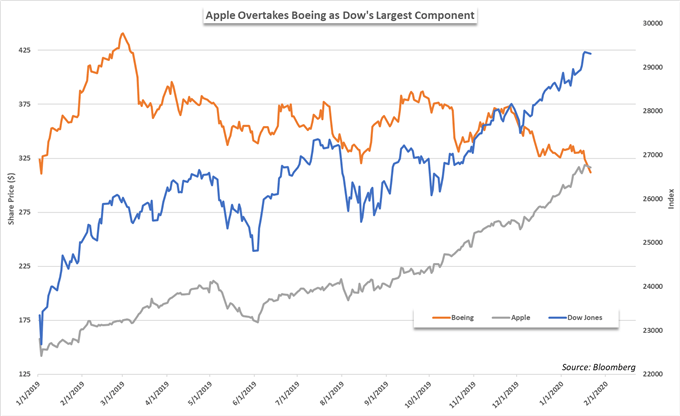 Claiming the top spot on each of the S&P 500, Nasdaq 100 and Dow Jones, Apple has effectively expanded its sway over the broader market which may result in greater volatility moving forward. While Apple has displayed its robust business model time and time again, disappointments can still happen.

This time last year, Apple announced it was downgrading its profit outlook which sparked a flash crash in a variety of currency crosses. With increased influence from a single stock, the major indices become more vulnerable to stock-specific developments. Apple will report earnings next Tuesday, an event that could prove monumental for the major indices.

In the meantime, Netflix earnings – reported after the close on Tuesday- will look to do their part in impacting technology sentiment, the sector and the Nasdaq 100. The streaming provider boasted strong earnings per share and subscriber growth for the fourth quarter but missed on revenue and subscription forecasts for the coming quarter. In turn, Netflix shares slipped 3% in after-hours trading.

Recent quarters of slowing growth and growing debt have seen Netflix lag other FAANG members, which has led some analysts to exchange NFLX for Microsoft in the popular acronym. Nevertheless, the popular stock has had a history of volatile earnings and has implications for other major players like Apple, Amazon and Disney which also operate in the streaming space. With that in mind, a post-earnings move of just 3% is relatively underwhelming and could suggest the report will have minimal impact on broader tech sentiment. 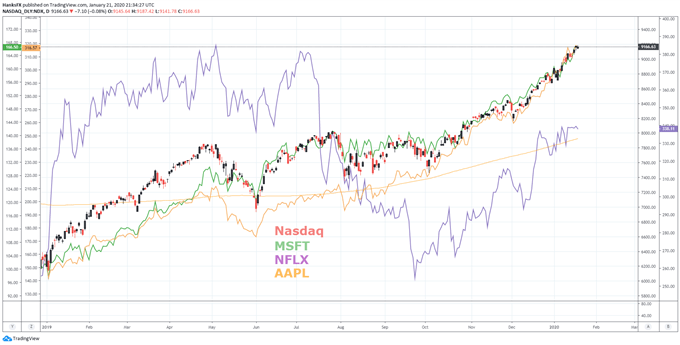 Therefore, stocks will likely maintain their focus on the spread of the Coronavirus, Boeing’s struggles and other technology earnings like Intel which reports on Thursday. The phase one US-China trade deal has paved the way for a material improvement in growth and US-China trade. For commentary on these themes, check back at DailyFX and follow @PeterHanksFX on Twitter.

Read more: What is the NASDAQ FANG Group and Why Does it Matter?