The Dow Jones and Nasdaq 100 pressed to fresh record levels on Wednesday ahead of the trade deal signing before retracing slightly as the two sides put pen to paper. The signing solidifies a de-escalation in a major conflict that has worked to produce uncertainty and spark volatility over the last year and a half. Now, market focus will likely shift to progress on the second phase which President Trump said the two signs will begin negotiating immediately.

Still, previous comments from the President suggest a completion of the second phase may have to wait until the 2020 election has passed. In the meantime, investors may reassess their positions with the first phase behind them which could spark a brief retracement in the Dow Jones and Nasdaq 100 over the shorter-term. 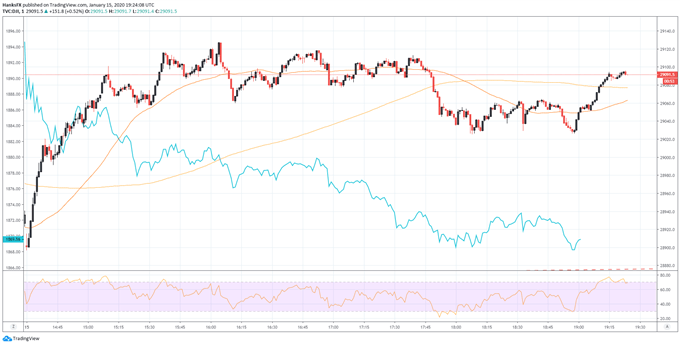 In the aftermath of the signing ceremony, some of the biggest benefactors of the deal suffered the deepest retracements – albeit “deep” was approximately 1%. The SOX semiconductor ETF has been an investment with heightened sensitivity to the economic conflict because of its large dependency on Chinese demand so an improvement in relations should theoretically revive lost demand. Consequently, SOX and its components like Micron and Nvidia have been roaring higher since mid-December when the deal was initially announced.

Now that the rubber has met the road, it could signal the end of a swing trade for some investors as they look to cast aside the semiconductor stocks after capturing their climb due to optimistic headlines. Either way, SOX will be an important sector to keep an eye on in the days after the signing as it could be an early warning sign of a broader stock retracement that I previously outlined as a possibility.

Tangentially, disappointing holiday sales figures from Target saw the retail sector fall under pressure on Wednesday. Missing out on toy and electronic sales, the massive retailer immediately suffered an 8% drop in its stock despite maintaining its quarterly earnings targets. Regardless, the warning from TGT may lend more importance to the Thursday release of US retail sales data. If retail sales for the holiday season disappoint more broadly, it could highlight waning consumer demand and speak to a weakening US economy. 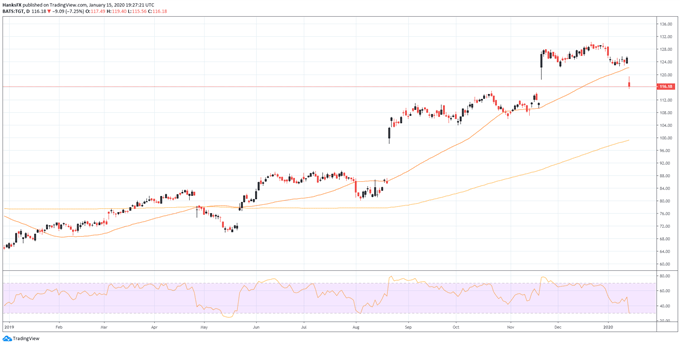 That being said, the Dow Jones and Nasdaq 100 were largely unbothered by Target’s miss as the trade deal hijacked investor focus but retail sales will offer the industry a second opportunity to have its voice heard. As the market reacts to the details of the deal and retail sales data, follow @PeterHanksFX on Twitter for updates.

Read more:How to Invest During a Recession: Investments & Strategy