The markets are taking a cautious approach as earnings season kicks off this week after the S&P 500 rose to a new record high this Monday as geopolitical tensions eased and markets eyed this Wednesday’s anticipated sign off on the phase-one trade deal between the US and China. JP Morgan and Citi Group led the charge this morning beating expectations. However, Wells Fargo printed disappointing figures missing on earnings and revenue. In net the banking sector is moving higher today, with the financial sector of the S&P 500 up 0.83% in Tuesday morning trading.

A better-than-expected earnings season could continue to lift the S&P 500 to new highs, but several headwinds remain in the economy and earnings season gives investors a chance to hear forward views from corporate executives. JPMorgan Chase CEO Jamie Dimon stated that consumers continue to be in a strong position. However, Mr.Dimon also gave mention to complex geopolitical issues as a potential headwind, something highlighted in both Citi Group and Wells Fargo’s earnings reports. 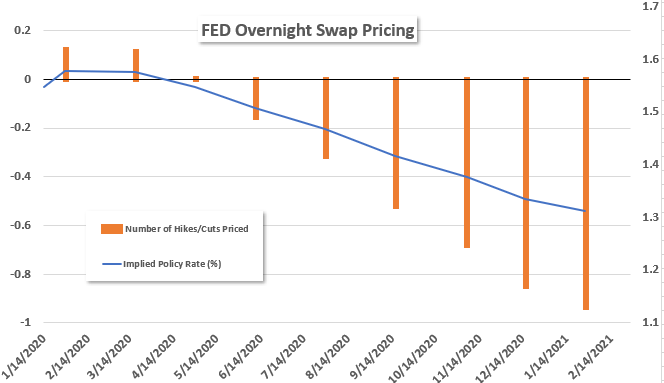 Risks stemming from changes in monetary policy was also a common theme noted in this morning’s earnings reports between the big banks. While lower rates can boost investment and economic conditions, they also cut into the profitability from interest-bearing assets held on balance sheets.

The Federal Reserve will look to keep their mantra of a “wait and see” approach after cutting rates three times in 2019, but overnight swaps are indicating a dovish lean into early 2021. Hitting their 2 percent inflation target will be the Fed’s key for interest rate adjustments this year, as the labor market remains strong.

However, the Fed’s preferred metric to measure inflation remains weak at a 1.5% annual basis according to the PCE deflator. Still, Core CPI has trended up to 2.3% in recent months which could signal future strength for the Fed’s watched PCE figures.