The Australian Dollar remained like most markets focused on antagonism between Iran and United States Thursday and moved up only slightly as Chinese inflation narrowly missed forecasts even as it remained elevated.

The official Consumer Price Index rose by 4.5% on the year in December, matching November’s rise and coming in just below expectations of a 4.7% increase.

Inflation has been climbing steadily in China since February 2019, when it stood at just 1.9%. Increased pork prices have been blamed for the most recent bout of strength. The meat is an absolute staple in China and an epidemic of swine fever has seriously affected stocks. There was modest good news on this front in December, with pork prices decelerating slightly.

That said higher inflation is likely to stay the stimulative hand of Beijing. The current target is for price rises of around 3%. There has been some speculation that this could be raised, to give the authorities more leeway to stoke the economy, but this prospect has yet to crystalize.

Stimulus looks to be needed though. Producer price inflation continues to slide, falling 0.5% on the year last month. That was at least better than the 1.4% fall seen in November, but still suggests that corporate profits will be hard to come by.

The Australian Dollar can often find itself the foreign exchange markets’ top liquid Chinese-economy bet, thanks to Australia’s famed raw material exports to the world’s second largest economy. It inched up very slightly after the data, but market focus is clearly elsewhere. 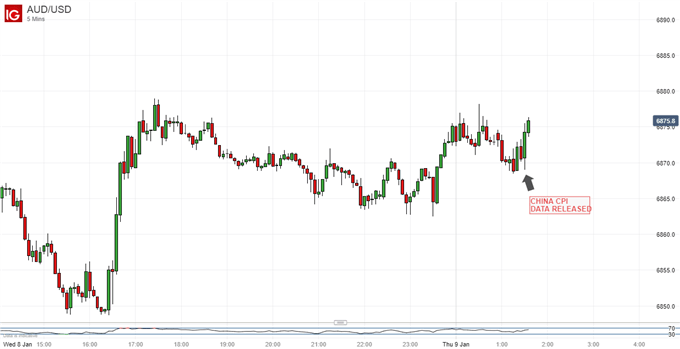 The Australian Dollar has of course been hit like all other pro-cyclical assets by heightened military tensions between the US and Iran. The currency tends to do better when investors feel better about global growth prospects, which broadly speaking they did as 2019 wound down, thanks to hopes for a trade deal between China and the US.

That hope remains live, with an interim, phase-one accord still apparently set for signing on January 15.

AUD/USD may have gleaned some support from fading expectations that record-low Australian interest rates could yet go lower next month. On January 3 that chance was rated at 51%, according to index provider ASX, It has since receded to 40%. 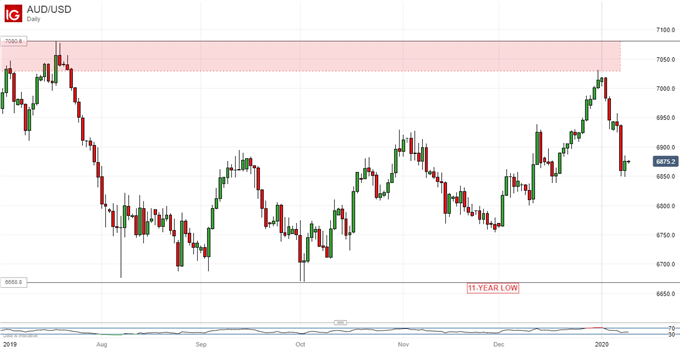 The currency seems likely to regain its former bid tone assuming that US-Iranian relations will allow this.

That in turn is likely to be sustained into the first Reserve Bank of Australia monetary policy meeting of 2020 which is coming up on February 4.