The Dow Jones futuressold off overnight on further escalation in the Middle East, but quickly recovered and are currently trading higher. The reversal will have the cash index opening amidst a shallow pullback/digestion phase, something pointed out as likely to come following extremes at the end of December only seen a few times in several years.

The Dow recently traded off resistance via an upper parallel that is part of a channel dating back to the spring of last year. This will be a focal point on further strength, while on the downside the trend-line running up from October is viewed as the first line of support. A touch-and-go off support could offer up a nice trend-continuation trade.

Recommended by Paul Robinson
Do you trade indices? Check out the Q1 Forecast.
Get My Guide

The DAX is set up for higher prices after tagging the August trend-line with almost exact precision and reversing on Monday. The trend is generally higher, and the trend-line gives the market some backing in the consolidation the market has been in since November. It will take a break below 12886 to turn the outlook bearish, otherwise the record high at 13596, created in January 2018, will become the next major focal point.

Gold has been ripping hard since around Christmas, and tensions in the Middle East have added some fuel. However, the rip appears to be ending in exhaustion with the development of a key-reversal, pin-bar, whatever you want to call it, possibly in the works.

There is still time left today, but if the session closes with a candle looking similar to what we see now then a retracement looks to be in the works. The area breached overnight is a major zone from the 2011/12 topping process, and could continue to be a problem for a while longer. 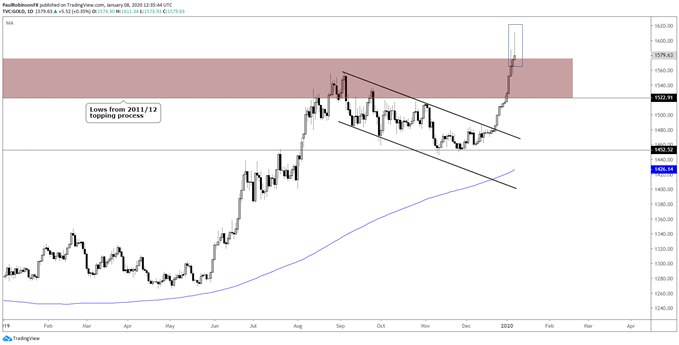