The recent uptick in US-Iran tensions was likely responsible for some of silver’s recent rally, a move that was echoed in other “safe” assets like gold and the US Dollar. After surging more than 11% from its December lows, the metal has encountered resistance around the $18.35 level that could look to stop the rally in its tracks. Inching into overbought territory, time is running out for the metal to pierce resistance before bullishness evaporates and bears stage a pullback.

Although XAGUSD has probed the level numerous times, it has been unable to post a daily close above – a development that would help convert the level from resistance to support. With that in mind, silver may require another fundamental catalyst to break the level and drive higher. As I noted last week, eventual Iranian retaliation may provide such a spark, but waiting – or banking – on an eventual attack is poor strategy and has left the door open for a modest pullback in my opinion. 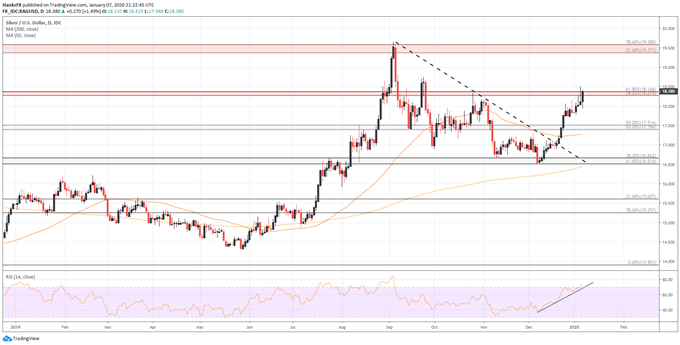 Still, I believe the longer-term outlook for silver and gold is bullish, so forecasting weakness here is against a backdrop of a shorter timeframe – one that looks to capitalize on the overbought nature of XAGUSD at this stage. Having said that, the coming days will be an important test for silver.

If the technical barrier holds strong, the metal may retreat to the $17.50 area to consolidate before attempting another move higher. On the other hand, the metal’s September swing-high around $18.75 will offer initial resistance should silver successfully close above $18.35. In the meantime, follow @PeterHanksFX on Twitter for updates.