The Australian Dollar was focused like most markets on rising tension between the US and Iran as the new year’s first full trading week gets under way, and retreated only modestly on news that China’s private service sector output decelerated a little in December.

The Purchasing Managers Index on the subject from media company Caixin came in at 52.5, below both November’s 53.5 and the expected 53.2 level.

In the logic of PMIs any reading over 50 signifies expansion for the sector in question and this measure remains comfortably above that point. Caixin covers smaller, private entities in contrast to the larger, state-linked firms encompassed by the official data. Adding this latest service sector snapshot to the slightly underwhelming manufacturing survey released last week yields a composite of 52.6.

All up, December’s PMIs speak to a Chinese economy expanding, but at a rather sedate pace. This may well of course be old news for markets, who have seen Beijing ramp up stimulus efforts in recent weeks. Investors will have to await details of the initial trade deal before they can judge the extent to which it is likely to fire up the world’s second largest economy.

China’s huge raw material imports from Australia can see the Australian Dollar act as the markets’ top liquid Chinese economy bet. It didn’t play this role to any great extent on Monday, however, losing only a little ground after the release. 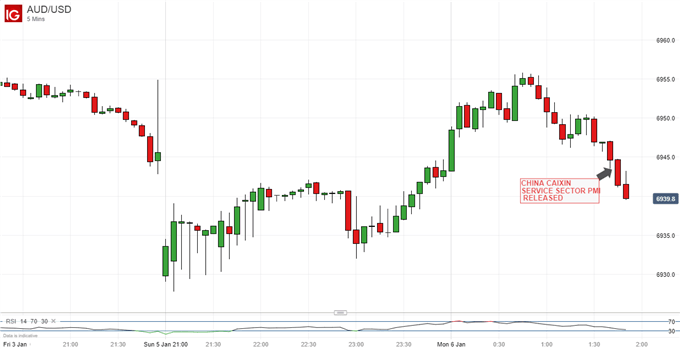 The Australian Dollar has made sharp gains against its US big brother since October. All such pro-cyclical assets have benefited as the prospect of at least an interim trade deal between China and the US has crystalized. A phase-one agreement is still due to be signed on January 15. 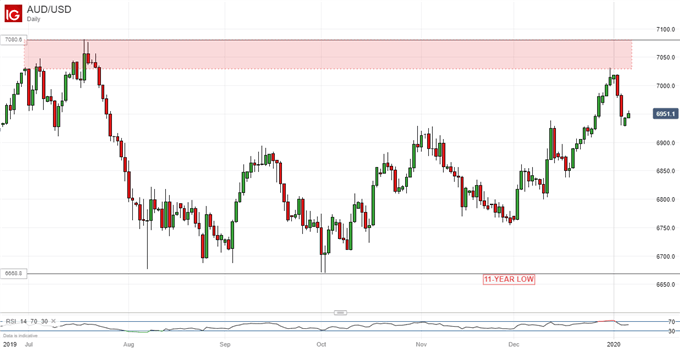 However, the Aussie has been hit by reduced risk appetite in the wake of last week’s US strikes in Baghdad which have seen Middle Eastern geopolitics return to the forefront of market concerns. Commodity currencies are unlikely to return to favor while this issue hangs over the market.

It’s notable too that markets do not yet have much detail about the nature of any US-China deal, with this month’s accord thought likely to amount to little more than a truce in tariff escalation. A substantive, durable trade agreement is probably a long way off, even if it is possible at all.

Closer to home for the currency, the Reserve Bank of Australia has yet to weigh in on AUD/USD’s rise. It is unlikely to fight it, but, at a time when domestic inflation is stickily low, the central bank is likely to express concerns about unwarranted currency strength.