The New Zealand Dollar rose on Wednesday as Gross Domestic Product for the New Zealand economy on a yearly basis printed at 2.3%, meeting expectations of 2.3%. The upbeat print sent the Kiwi higher and could help bolster strength in coming days and propel it above a key technical level against the USD. The seasonally adjusted quarterly growth came in at 0.7%, beating expectations of 0.5%. But, the previous quarter saw a downward revision from 0.5% to 0.1%.

The report revealed that services growth led the strong performance from the New Zealand economy in the 3rd quarter with retail and accommodations rising 2.4%, the best growth in eight years according to Statistics New Zealand. Growth in primary industries rose 1.5% in forestry, fishing and agriculture, but mining saw a 1.1% decline. Spending on investment was flat, however construction activity in the residential sector remains at historically high levels according to the report. 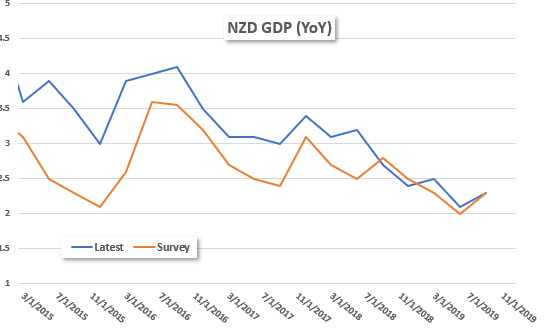 Along with the upbeat GDP print, the New Zealand economy has seen a modesty recover in economic data through the second half of the year when compared to expectations, reflected by the Citi Economic Surprise Index rising above the zero mark this past July and currently standing at 26.20. 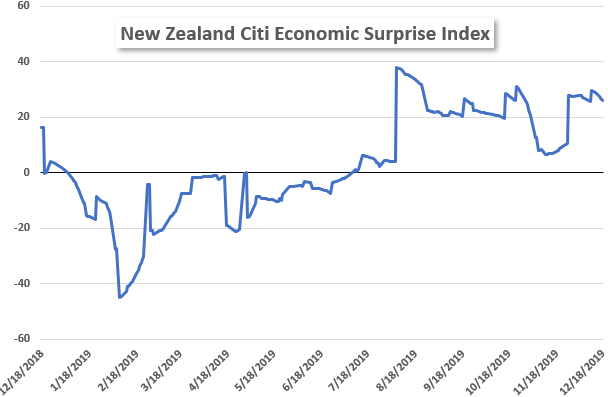 The resulting strength in the Kiwi from the beat in GDP is likely reflected from decreased expectations for a rate cut from the Reserve Bank of New Zealand. While the RBNZ does not explicitly target GDP as a policy variable, it does aim for an inflation objective. Strong GDP prints are likely to lift inflation expectations and in turn, raise the likelihood of the RBNZ keeping rates steady and priming the Kiwi higher as a result. The current 2-year inflation forecast from the RBNZ stands at 1.8%, which falls slightly under the targeted 2 percent mid-point. 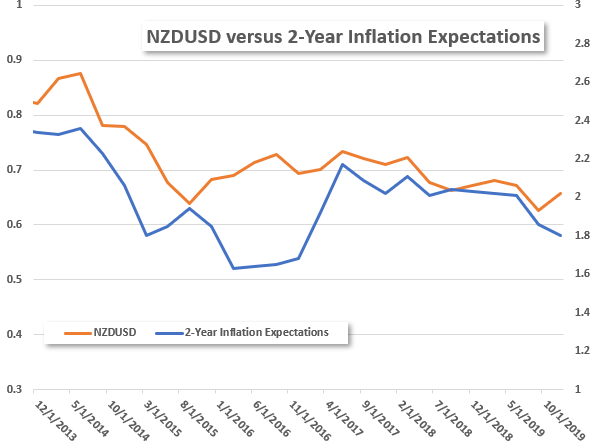